Following the World Cancer Day celebrated on every February 4, the World Health Organisation has stated that Nigeria has the highest number of cancer cases in Africa, with 10,000 deaths annually.

In order to stem this ugly tide, a new test has shown prove to prevent cancer patients from undergoing chemotherapy. According to a report published on DailyMailonline, it stated that using a genetic test could tell doctors which breast cancer sufferers need the powerful treatment.

The reports further stated that thousands of women with breast cancer could be spared the gruelling ordeal of chemotherapy, a trial suggests. A trial led by experts at the University Hospital of South Manchester suggests 63 per cent of women with the most common form of breast cancer could avoid chemotherapy by using a genetic test called Oncotype DX. Up to 6,000 a year in Britain could avoid the need for chemotherapy if the test was widely used, the results suggest. 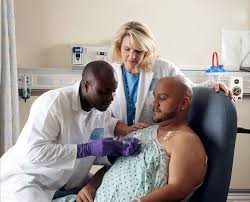 The surgeon who led the trial, Professor Nigel Bundred explained the essence of Chemotherapy, stating that it is commonly used after surgery to stop breast cancer returning. But by analysing the genetic make-up of the tumour, scientists can now calculate the likelihood of the cancer returning, allowing them to identify women at low-risk.

“Deciding whether to have chemotherapy is a big decision for women in this position to make”.”’Their life is on hold for six months while the treatment is completed, they may lose their hair and there is fatigue and other side effects”.

“But they are also deciding about the risk of recurrence – it is a decision they will have to live with for the next five or ten years of their life. This test helps give women more certainty about their decision.’ NHS watchdog NICE issued guidance approving use of the Oncotype DX test in September 2013”.

But since then only 9,200 women have been given the test – fewer than 3,000 a year. Experts hope the new findings, published in the European Journal of Surgical Oncology, will see wider use of the test. One reason for low take-up is thought to be the price of the test – £2,580 minus a confidential NHS discount.