– WHO and partners take on malaria: the top killer in north-eastern Nigeria

Following more than 8 years of conflict in Borno state in north-eastern Nigeria, some 3.7 million people are in need of humanitarian assistance and all are at risk for malaria. WHO estimates that every week, around 8500 people are infected with the disease in Borno State? With the high transmission season for malaria lasting through October, WHO expects these numbers will increase.

In Borno State, WHO estimates more than half of deaths recorded are currently due to malaria, more than all other causes of death combined, including cholera, measles and hepatitis E. A highly vulnerable population, consisting largely of children (58.8%), is at risk of disease outbreaks. 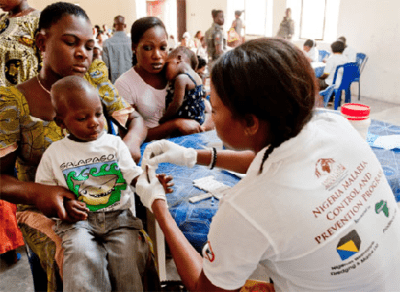 With more than 60% of health facilities only partially functioning, many people have not had access to regular health services, including routine vaccinations and basic medicines, for years. In addition to security concerns, acute malnutrition caused by food insecurity is rising in parts of the state. Between malnutrition and death is virtually always disease, and malaria often turns cases of malnourishment deadly.

“Malaria, malnutrition, fragile states and civil strife often feed each other,” says Dr Pedro Alonso, Director of WHO’s Global Malaria Programme. “Wherever we have a humanitarian crisis in a malaria endemic country, we can almost always be sure that malaria is the number one killer.”

Malaria is a life-threatening disease caused by parasites that are transmitted to people through the bites of infected female Anopheles mosquitoes. In 2015, there were more than 200 million cases of malaria and 437 000 deaths. More than 90% of malaria deaths occur in Africa.

However, malaria is preventable and curable. Increased efforts over the last 15 years have drastically reduced malaria deaths and cases – malaria mortality rates dropped by more than 60%, averting 6 million deaths.

“The most effective way to reduce deaths in emergencies in fragile states, especially those facing malnutrition, is by boosting malaria prevention and control, however, this is often not viewed as the top priority during an emergency response,” says Dr Alonso. “We are working with our WHO colleagues and many partners to change this.”