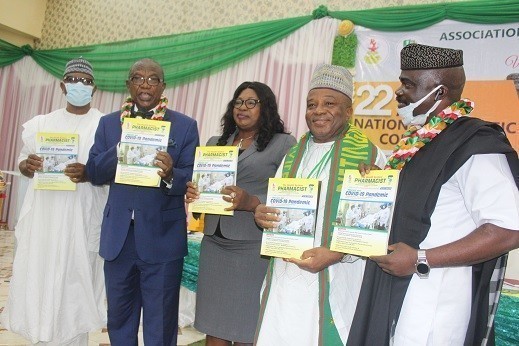 The Association of Hospital and Administrative Pharmacists of Nigeria (AHAPN) has launched its 4th Edition of The Health System Pharmacist, a national magazine of the association. The colourful occasion held at the opening ceremony of the 22nd Annual National Conference of AHAPN, at De-Peace Hotel and Suites, Hall, Ilorin, Kwara State.

The coordinator of the launch, Dr Sam Adekola, ACPN national chairman, aroused the audience to donate generously in purchasing the magazine as he began from the PSN President, Pharm.(Mazi) Sam Ohuabunwa, who officially unveiled the magazine with a purchase of five copies at N100,000 for himself and 10 copies for the PSN at N200,000.

Speaking on the content of the magazine, the editor appreciated all members of the editorial team for their selfless sacrifice in producing the magazine for the association. She said the magazine contains pharmacists experiences in COVID-19 as well as different methods adopted by pharmacists for the survival of patients and their households in the first and second wave of the pandemic.

She urged members and guests to get enough copies as they will be very handy for their use, since  the pandemic in still around, “ Please buy for yourself, friends and colleagues as the publication is loaded with various lessons for the development of modern pharmacists”, she noted.

Adekola, on behalf of  ACPN, purchased 10 copies at N250,000, newly appointed chairman, Committee of Head of Federal  Health Institutions in Nigeria (COMHFHI) Dr Adeyinka  Ishola, took five copies for himself at N50,000, and five copies for his group at N50,000; representative of the chairman of the occasion, Barrister Kehinde Elija, picked five copies for M100,000. Still launching the magazine, Prof. Ibrahim Oreagba, newly elected secretary general of the WAPCP, also picked 2 copies for N20,000, while Dr Dan Orumwense, immediate past chairman, COMHFHI, launched 2 copies for N20,000, and the list continues.