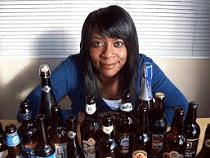 Prevention is better than cure, says the popular adage, but this warning usually fall on deaf ears of alcoholics, as some have never imagined the possibility of living without alcohol. However, a new study has finally validated it that the risk of breast cancer is higher in black women who drink alcohol than their white counterparts.

The research which established that just two drinks a day significantly increases the risk of breast cancer for black women, added that  even one drink a day elevated the risk for all types of breast malignancies in black women.

According to the study reported on DailyMailOnline, the researchers examined data on drinking habits for 22,338 African-American women, including 5,018 who were diagnosed with invasive breast cancer.

It was stated that 45 percent of the women said they never drank and another 21 percent said they used to consume alcohol but currently did not.

While the increased risk was smaller, around four percent, for former drinkers and for women who currently had four to six drinks a week. For those who had seven to 13 drinks a week, the risk increase was seven percent compared to light drinkers.

The senior study author Melissa Troester sasserted: “Many breast cancer risk factors like family history cannot be changed; however, alcohol drinking can be moderated if a woman wants to decrease her risk. “

Troester, a researcher at the University of North Carolina at Chapel Hill added: “Most studies show that risk is only significantly increased if women drink more than one drink per day.”

The expert said it’s possible alcohol may interfere with hormone levels in a way that encourages tumor growth, and it also might cause genetic damage that makes cancer more likely.

The study was conducted by the University of North Carolina Lineberger Comprehensive Cancer Centre.