The declaration of the collaboration, contained in a press release jointly signed by the leadership of ACS and CHAI stated that an estimated 44% of all cancer cases that occur in sub-Saharan Africa each year occur in these six countries. The agreements will set competitive prices on the medicines, thus allowing African governments to realize substantial savings while improving the quality of available treatment.

The collaboration is part of a broader effort led by ACS and supported by CHAI to improve the market environment for cancer care in Africa.

The document reads in part: “For more than a hundred years, the American Cancer Society and our volunteers have led the fight for a world without cancer, and we’re committed to making sure that the progress we’ve made in the United States is not limited to our borders.  Every person with cancer deserves access to treatment, no matter where they live. Collaborating with companies like Pfizer and Cipla is a critical next step toward leveling the playing field for people with cancer and saving lives in this part of the world”, stated Gary M. Reedy, CEO of The American Cancer Society.

He continued: Cancer has emerged as a major public health problem in sub-Saharan Africa and we are committed to working with stakeholders to tackle this growing health threat,” said Richard Blackburn, Global President, Europe, Africa, Middle East, and Biosimilars, Pfizer Essential Health. “At Pfizer, we are constantly exploring ways to improve access to our medicines and combat non-communicable diseases. We are proud to work with the American Cancer Society and the Clinton Health Access Initiative to improve the availability of these crucial treatments for patients.” 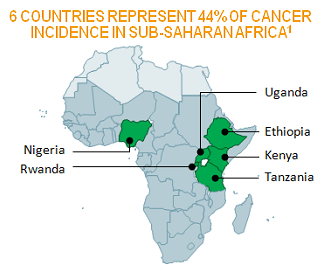 Two of many important barriers to improving cancer care in Africa have been limited access to treatments that have been used in higher-income countries for decades and the proliferation of counterfeit cancer drugs sold at premium prices. Patients are almost twice as likely to die of cancer in sub-Saharan Africa than the United States. The five-year survival rate for women with breast cancer in the United States is 90%, but in Uganda it’s just 46%(2). Cancer kills more people in the region than either malaria or tuberculosis(3). By 2030, the World Health Organization (WHO) estimates that for every four deaths from HIV/AIDS in sub-Saharan Africa, there will be three deaths from cancer(3).

“The state of cancer treatment in Africa today is very reminiscent of the challenges faced when working to increase access to lifesaving antiretroviral therapy for HIV/AIDS over a decade ago,” stated CHAI CEO Ira Magaziner.

“While cancer treatments and the tools for early diagnosis are readily available in developed countries, market forces and other barriers have limited access in Africa. As was done for the HIV/AIDS crisis before it, this public-private collaboration will help revolutionize cancer treatment in sub-Saharan Africa and has the potential to save thousands of lives each year.”

To help develop and sustain the volume pricing structure announced recently, ACS and CHAI are working with IBM Health Corps, a pro bono consulting program, to develop and deploy ChemoQuant, chemotherapy forecasting software to help countries quantify their cancer medicine needs and plan budgets and procurement. Uganda is now beginning to use the software andfive additional countries are expected to follow suit by year’s end.

“When the American Cancer Society approached us last year to help bring to life their ideas for fighting cancer in the world’s most neglected areas, we knew this was the start of something powerful.By bringing together IBM’s expertise in cognitive computing, analytics, and software design expertise with the experience and vision of ACS, we have laid the foundation for transformational work in cancer care”, said Jennifer Ryan Crozier, IBM’s Vice President of Corporate Citizenship and President of IBM’s International Foundation.

The cancer burden is mounting in sub-Saharan Africa and deaths remain high due to late diagnosis and lack of treatment. In 2012, there were an estimated 626,000 new cases of cancer and 447,000 cancer deaths in the region. Deaths from cancer are expected to almost double by 2030 due to aging populations. Yet global funding for cancer prevention and treatment in lower-income countries is far lower than other diseases including HIV, malaria and tuberculosis, amounting to less than 2% of global health spending.Facilitating access to high-quality, affordable chemotherapeutic agents is a critical step to improving cancer treatment, but many more issues need to be addressed, such as access to treatment facilities and workforce shortages. ACS and its partner organizations are committed to long term strategies to address the many barriers to care facing cancer patients in sub-Saharan Africa.

These agreements announced today are an important part of a larger strategy that ACS and CHAI are implementing with African health ministries to improve patient access to affordable, quality-approved oncology medicines and increase procurement capacity by governments. This includes reducing reliance on middlemen and private distributors, stabilizing prices, rationalizing orders, streamlining registration of products approved by a stringent regulatory authority, and promoting the entry of international suppliers with a range of quality-approved products.  Analysis of current procurement practices suggests that African governments could move to cost-competitive, quality-approved medicines while reducing current costs by more than half through effective implementation of these programs.

The agreement with Pfizer includes the following medicines:

The agreement with Cipla includes the following medicines:

The release also explained how the partnership works adding that these market access agreements were negotiated by CHAI, who received funding and technical assistance from ACS for these efforts. ACS and CHAI plan to continue working together to pursue additional market access collaborations to advance this ongoing effort.