Enzymes are proteins which are responsible for catalysing most metabolic reactions occurring in biological systems. Enzymes are highly selective and specific in their activity, as they usually catalyse only one reaction or type of reaction.

Enzymes are now widely used in industry, owing to their specificity for their particular substrate and the fact that they are not consumed after each reaction means that small amount of enzyme can catalyse the formation of large amount of product, making their application very economical.

Sometimes, enzymes can be mixed with their substrate in solution, kept at a suitable temperature and pH, and allowed to catalyse the reaction in which substrate is converted to product. In some cases however, enzymes are immobilised on a suitable insoluble support. For example, some enzymes maybe trapped in little jelly-like beads substance sodium alginate. The beads can be packed into a container and a solution of the substrate allowed to flow over them. The enzyme then convert the substrate into product as it flows by. 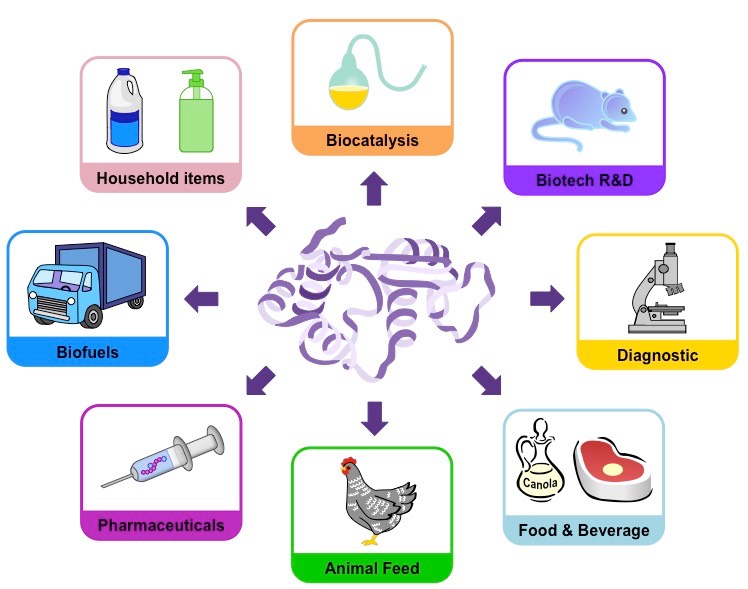 There are several advantages of using immobilised enzymes, rather than enzymes in solution:

The enzymes are easy to recover, so that they can be used over and over again

However there are some demerits of using immobilised enzymes one of such is that they work more slowly than enzymes in free solution.

Fructose are widely used in food manufacture because it is sweeter than glucose. It is made from starch, usually obtained from maize. First the starch is converted to glucose using the enzyme Amylase. Amylase is cheap and easy to obtain; usually from fungi. Next glucose is converted to fructose using the enzyme Glucose isomerase. This enzyme is more expensive to produce, so it is used in immobilised formed so as to be easily recovered and reused.

Enzymes such as proteases are used in the manufacture of detergents for the removal of stains such as blood and sweat. Proteases are enzymes which hydrolyse proteins to polypeptides or amino acids. Example of proteases commonly used for this purpose is Subtilisin, which is obtained from bacteria. Subtilisin and other proteases have been engineered and modified to work alongside with bleaches and other chemicals in detergents that can affect their shapes. They have also been made more thermostable and been used together with lipases – in biological detergents to break down and digest – the substances in stains into smaller, water soluble substances

Proteases are also used to pre-digest proteins during the manufacture of baby foods.