The Nigeria Centre for Disease Control (NCDC) as at 1 pm on Tuesday, disclosed that there are two new cases of the virus in the country making a total of 42 persons infected with the  disease.

Making the disclosure through its Twitter handle, the agency noted that the two new cases of #COVID19 were from Lagos and Ogun states, while one of them is a returning traveler, the second is a contact of a confirmed case. 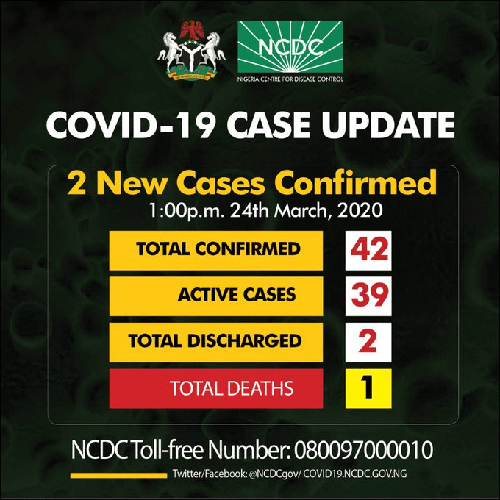 Meanwhile, the Chief of Staff to President Muhammadu Buhari, Abba Kyari tested positive for coronavirus on Monday, several days after returning from an official trip to Germany.

Although there were suspicions from some quarters, that President Buhari himself should be tested, and after conducting the test, it showed he was negative to the virus.

Reacting to Kyari’s status, Nigeria former Vice president Atiku Abubakar tweeted a word of prayers for his quick recovery. His tweet reads:  “My thoughts and prayers are with Chief of Staff, Abba Kyari”.

Record shows that the virus has infected over 361, 510 persons worldwide, killing, at least, 16, 146 according to an AFP tally on Monday evening.

Italy, which recorded its first coronavirus death in February, now has more fatalities than China with 6,077, as well as having 63,927 declared infections with 7,432 recoveries.

READ
Why Nigeria Lags Behind in Drug Development - Prof. Ibezim