Researchers from the University of British Columbia in Vancouver, Canada, have asserted that regular exercise may help ward off memory decline in people with vascular cognitive impairment.

Explaining reasons behind the development, they described Vascular Cognitive Impairment (VCI) as the second leading cause of dementia – after Alzheimer’s disease – accounting for around 10 percent of cases. People with VCI experience deterioration in mental abilities, such as memory, thinking, problem-solving, and language.

VCI develops as a result of reduced blood flow to the brain that damages and eventually kills brain cells. The death of brain cells causes problems with cognition – memory, thinking, and reasoning.

Blood flow can diminish due to narrowing and blockage of small blood vessels deep in the brain, through a major stroke, or many mini strokes. In many of these cases, these difficulties are linked to underlying health conditions, including high blood pressure and diabetes, and lifestyle choices such as smoking and being overweight.

According to a report published on Medical News Today, “Studies have shown that exercise can help reduce the risk of developing memory problems, but few studies have looked at whether it can help people who already have these problems get better or keep from getting worse,” says study author Teresa Liu-Ambrose, Ph.D., of the University of British Columbia in Vancouver, Canada.

Liu-Ambrose and team aimed to assess what effect an aerobic exercise-training program would have on cognitive and everyday function among 70 adults with VCI with an average age of 74 years.

The study findings were published in Neurology, a medical journal of the American Academy of Neurology.

While there is no specific treatment for VCI or a method to reverse the damage caused to the brain, there are ways to slow down the progression of the condition. Lifestyle changes – such as eating healthily, weight loss, quitting smoking, and regular exercise – can also tackle the underlying cause of high blood pressure.

The participants were divided into two groups. One group took part in 1-hour exercise classes three times a week for 6 months, while the other group received monthly information about VCI and a healthy diet, but no information on regular exercise.

Overall thinking skills, executive function skills – such as planning and organizing and how well daily tasks were completed – were assessed in participants before the study, on study completion, and then again 6 months later.

Compared with the non-exercise group, the training group experienced blood pressure improvement and improved on a test to measure overall cardiovascular capacity by logging the distance they could walk in 6 minutes. This finding is important as high blood pressure is a risk factor for developing VCI, say the researchers. 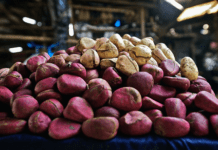