In what many termed as historic, the Faculty of Pharmaceutical Sciences, University of IIorin (UNILORIN) has churned out its first set of pharmacy graduates.

The colourful maiden induction and oath-taking ceremony of 17 Bachelor of Pharmacy (B. Pharm) Degree graduands which took place at the institution’s main auditorium on May 4, 2017, attracted the rank and file of the school management officers, high profile pharmacists both in academic and administrative positions, pharmacy students and their parents.

Speaking at the occasion, Pharm. N. A. E. Mohammed, registrar, Pharmacists Council of Nigeria (PCN) congratulated UNILORIN management on the historic induction of its first ever pharmacy graduands, adding that he was glad the faculty has improved from what he saw on his first visit to the school.

“Pharmacy is one profession that is seriously understaffed. Imagine having only 17,000 registered pharmacists to a population of over 180,000 million Nigerians. It is quite worrisome! But we are hopeful all that will change soon.

“However I will advise the university to retain its best materials for internship and official engagement. Once you allow them to escape from the system, it takes toll on them and often leads to what is called abandoned project,”” he warned.

Continuing further, the registrar admonished the graduands that there is no limitation to where each individual can reach in life progress in life, noting that pharmacists competency is not only about knowledge and skills.

“That is indeed the third and life-long phase of pharmacy training,” he concluded.

“We are indeed grateful for where we are today but promise not to rest on our oars until we get to the zenith. I also want to use this opportunity to specially appreciate Peace Standard Pharmaceutical Industries and Pharm. Olakunle Ekundayo, chairman of Drugfield Pharmaceuticals,” he enthused.

In her keynote address themed, “From Drugs to patient care: Pharmacy in the next dispensation,” Prof. Mbang Femi-Oyewo, dean, Faculty of Pharmacy, Olabisi Onabanjo University (OOU) declared that as a proof of the public’s confidence in pharmacists, the profession is continually ranked by the Gallup Poll as the most trustworthy profession globally.

According to her, in an era of rapid change in health care delivery, the pharmacy profession is experiencing significant growth and development such that it has been rated by Forbes as the best healthcare profession. 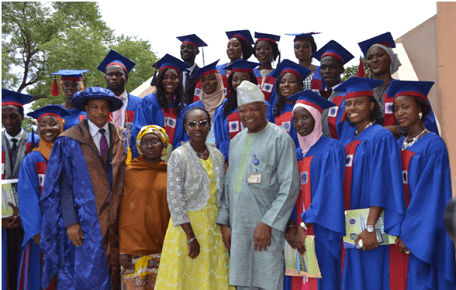 Tracing the history of pharmacy from 1900s to 1950 when Pharm D degree was first issued by the University of Southern California, Femi-Oyewo remarked that the fields of the practice has been robustly shaped to cut across regulatory and enforcement bodies, journalism, military as well as various pharmacy arms such as community, hospital, administrative, academic and industrial areas.

“One way or the other, I always feel I have an emotional attachment with UNILORIN. My first here was during the accreditation process with National Universities Commission (NUC). At that time, your faculty building wasn’t in place.

“Today, I am happy at how things have eventually panned out. I also heard that your Pharm D programme will take off in a couple of months. It shows we are improving. I want to see a situation where Pharmacy practice in Nigeria will get to a computerised stage where hospital physicians will always demand patients record from pharmacists as I saw during my visit to the United States in 1988,” she recalled.

With an air of a fulfilled, Prof. Abdulganiyu Ambali, vice chancellor of UNILORIN who was represented at the occasion by Prof. Gabriel Olatunji, deputy vice chancellor (research and academics) remarked that he was quite impressed with the historic achievement.

“As graduates of this noble faculty, you (graduands) should be proud too. After all, wherever the issue of first graduates from UNILORIN’s pharmaceutical sciences is discussed, your names will always come up.

“I also want to thank the first two deans (Olurinola and Ibrahim) and the present one (Agunu) for their painstaking efforts and contribution. To show you the extent of hard work that has gone into this historic event, Prof. Agunu used to visit me, on the average, about three times a day to update me on the progress of their programme,” he disclosed.

As a parting shot, the vice chancellor called on pharmacists in the country to safeguard the influx of fake drugs in the society.