The international humanitarian organisation Médecins Sans Frontières/Doctors without Borders (MSF) is launching today a large scale measles vaccination campaign in Conakry, together with the Guinean Ministry of Health. Since the beginning of the year there have been 3468 confirmed cases and 14 deaths dues to measles in Guinea. Conakry and Nzérékoré are the most affected districts.

Routine vaccination in Guinea was drastically reduced during the 2014-2015 Ebola epidemic, both because most resources and attention were geared towards the management of Ebola and, mainly, due to fear. People stayed away from health facilities and vaccination activities were suspended because of infection risks, and this left thousands of young children unprotected against easily preventable diseases. A nation-wide vaccination campaign was organized by authorities one year ago to vaccinate the children who had not received their shots (MSF did not participate to this campaign). Despite this catch up effort, a measles epidemic was declared on February 8th 2017.

“The fact that a new epidemic occurs barely a year after a massive vaccination campaign is a worrying sign of the weakness of health care in Guinea”, says Ibrahim Diallo, MSF’s representative in Guinea. “Major problems remain in the health system, undermining its capacity to prevent and respond to outbreaks effectively and in a timely manner.”

After the devastating Ebola epidemic that killed over 11,000 people and severely affected the health systems of the three most affected countries (Guinea, Sierra Leone and Liberia), the WHO and leading public health experts insisted on the importance of rebuilding responsive health systems in the three countries, equipping and supporting them to better manage similar or new health crises.

According to the UN body in charge of Ebola response, only 18% of the funds disbursed to support countries during Ebola were meant for recovery. International donor commitments to health systems strengthening have focused on improving disease surveillance to ensure early detection and response to outbreaks, such as Ebola. However, in the face of a large outbreak of measles, MSF (in Conakry) and Alima (in Nzérokoré district) are currently the only NGOs providing support to the Ministry of Health for the vaccination campaign in the worst affected districts. WHO and UNICEF have pledged support to other affected districts across the country, which is still under discussion. 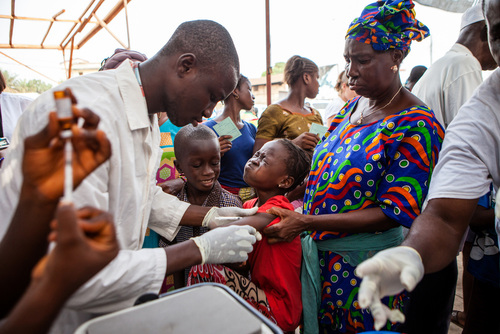 “If Ebola was a wakeup call, since then the world seems to have fallen back asleep. As shown by this measles outbreak, the concrete impact of the promises of funding, support and training made during and after the Ebola crisis still remains to be felt by ordinary Guineans”, says Dr Mit Philips, MSF’s Health Policy Analyst. “Access to good healthcare was clearly lacking before Ebola struck, and the country is still facing today the same problems that it was facing then, largely alone, in spite of the international public commitments to build better and more responsive health systems”.

To contain the measles epidemic, MSF, with the Ministry of Health in Conakry, is mobilizing 126 teams of 13 people, spread out across 164 vaccination sites in a city of 3 million people. All children from 6 months up to 10 years old will be vaccinated. MSF also supports 30 health centres in Conakry to care for children suffering from mild cases of measles, as well as the referral centre where severe cases are hospitalized.

Distributed by APO on behalf of Médecins sans frontières (MSF).