The prestigious award, one of UNILAG’s highest honours for tutors, was presented to Igwilo during the grand finale of UNILAG’s 2016 convocation ceremonies, held at the Jelili Omotola Hall (formerly Multipurpose Hall) of the University.

The “Distinguished Professor” honour is the latest feather to the cap of Igwilo, West Africa’s first female professor of pharmacy and one of the team of researchers who worked on the anti-sickling medicinal plant extract, Niprisan.

Igwilo, a professor of Pharmaceutics and Pharmaceutical Technology and former Dean, School of Pharmacy, University of Lagos, is a fellow of the Nigeria Academy of Pharmacy (NAPharm), the Pharmaceutical Society of Nigeria (PSN) and the West African Postgraduate College of Pharmacists (WAPCP).

The Distinguished Professor who chairs the Education Committee of NAPharm has over 60 publications in learned journals and books, and is a recipient of the officer of the Order of the Niger (OON). 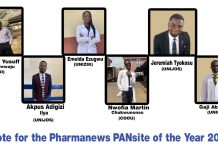 Vote for the Pharmanews PANSite of the Year 2021