The Association of Lady Pharmacists (ALPs) Lagos State branch, has called on the Federal Government to establish legislation against drug abuse and misuse in the country, as this constitutes a menace in the society and a threat to national security.

ALPs made the call during their annual school outreach to the Osborne Schools Complex, Ikoyi, where they enlightened the secondary school students on the dangers of drug abuse and misuse to their health.

Speaking with Pharmanews in an exclusive chat during the programme, the Chairman, Planning Committee, Pharm. (Mrs) Folashade Kolapo decried the degree of moral decadence in our society, where youths have taken to drug abuse and misuse without legal deterrents or punitive measures exercised against them.

Her words:” I think legislation has to be put in place and should be enforced, because it appears we don’t have rules preventing people from selling drugs illegally. More so, our youths are seen on the streets smoking cocaine and other substances, without checks. Thus, governments at all levels must ensure that legislation is put in place to prohibit all these nefarious acts, and to safeguard the health of our youths”.

READ
What Many People Don’t Know about Okro (Okra)

Kolapo who further condemned the misuse of cough syrups with Phenergan, said it’s high time such practices are curtailed in our society.”In fact, even common Coughlin, and other cough syrups that have Phenergan are being misused by our youths to make themselves high, as stimulants to read, and even to drug girls in order to rape them. I think the government has a big role to play in curbing these evil acts, and parents as well.

On the essence of their campaign, she said drug abuse has several negative effects on individuals, families and the society at large, saying that was why they were out to create awareness on the social-economic consequences of drug abuse and misuse.

“Of a truth, parents have a lot to do in this regard. When children are well brought up, and parents are free from illicit drugs use, then students will be better behaved and they will not likely join peers in the act of drug abuse”, she quipped.

The Vice Chairperson of the association, Pharm. Nsese Mfon Ufot , explained the rationale behind the choice of the centre of the campaign, saying it is better to catch them young before the innocent minds are polluted by the bad eggs in the society. “We have chosen secondary school because we don’t want the students to experience it at all. With the level of presentation we had today, it’s obvious the students have heard enough on how to say no to drug abuse and misuse”.

Although some schools might have been infiltrated with these unscrupulous elements, she however expressed the determination of the association to spread the gospel against drug abuse and misuse to as many secondary schools as possible to reach. “We are sure our enlightenment will go a long way in discouraging them from going into the evil act”.

The Chairman, Association of Lady Pharmacists (ALPs) Lagos State, Pharm.(Mrs) Modupe Alli further explained the mission of the group, saying ALPs, as an interest group of the Pharmaceutical Society of Nigeria (PSN) has designed her programmes to reach out to students, because they are the future of the nation, and  a nation without sound and vibrant youths has no sound future.

She also mentioned that their programmes cover the less privileged in the society. The Lagos ALPs activities focus on: “Professional advocacy, social and developmental campaigns, charity and philanthropy, then environment and personal health”.

The high point of the event was the presentation of sanitation items- waste bins and brooms to all the ten schools in the complex. Receiving the gifts on behalf of the schools, Mrs O.B. Badejo, principal of Akande Dahunsi Senior Secondary School, appreciated the Association of Lady pharmacists for their kind gesture, wishing them well in their professional journey in life. 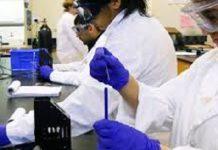