Prof. Philip Folaranmi Olurinola is a revered academic pharmacist and fellow of the Pharmaceutical Society of Nigeria (FPSN). In this interview with Adebayo Folorunsho-Francis, Olurinola highlights some challenges he faced while shaping his pharmaceutical career. He also reveals why he thinks pharmacists should seek to be certified public analysts. Excerpts:

Tell us about your early life

I was born in October 1939 to the family of Chief John Ogunrinola from Kwara State. I was mostly a village school boy. I started my kindergarten education at a church school in 1943. There, we sang choruses, after which we were asked to sleep on the mat (laughs). From that activity, it gradually developed into a primary school when two villages combined to have a central school. It was called Iwo Primary School. I finished Standard 6 there in 1954. We were the first set in that school.

From there, I went to Titco College. It was a mission secondary school (in present-day Kogi State). I graduated in 1960 and gained admission for HSC. Somehow, however, there was a problem with my grading, which was not discovered until years after.

As at that time, I had prepared myself for a diploma programme at the school of pharmacy in Ahmadu Bello University (ABU), Zaria. I started the course in October 1961 till June 1966. It was then a five-year diploma programme for secondary students. I was among the first set of the newly upgraded old school of pharmacy which used to train dispensers. We were the first set of Chemists and Druggists (C&D).

By the time we finished, we sort of have double certificates – one for C&D Diploma, the other for Pharmaceutical Chemist Diploma. The latter was academic, while the former (C&D) was professional.

Did you actually set out to study Pharmacy from the beginning?

No. My original intention was to study Medicine, not Pharmacy, which I knew nothing about. But my late friend, Benjamin Fashanu (we were together in secondary school and subsequently at school of pharmacy), was the one who convinced me to choose Pharmacy. He seriously pleaded with me.

Even when the advert about the school programme was still on, he took the form and filled it. I kept telling him that I wasn’t interested, until the deadline was a day to go. It was then he told me, “Philip, I have submitted this thing already; please let me submit yours, too. After all, if you are admitted, you can decide not to go. I need you to just sign. That is all!’

I gave it another thought and later signed. And so, he submitted it. Eventually, we were admitted. At that time, he also had the opportunity to go to Marlborough because both of us were qualified. Then, we were living in the same room and sharing the same bed. We were to go to Germany for three years and then Britain for the remaining three years. But all the people I went to for counselling advised me to choose Pharmacy.

When it was time to go, Ben changed his mind and said that he wasn’t sure the trip abroad would profit his career. One week after I left, he came to join me in the same room at the school of pharmacy, Zaria, saying he didn’t know he was so emotionally attached to me and was finding it hard surviving on his own. So we were together.

As at then, there was no pharmacy degree programme in the whole of Nigeria. Later, it started at the University of Ife (now OAU) in 1962, thereby making the institution the first to blaze the trail.

However, I wasn’t impressed with the lifestyle of pharmacists (dispensers) in those days. A number of them were drunkards; some others were into debauchery. It was at that point I prayed that God who gave me the privilege to start the course should make me to turn out a better pharmacist.

Somehow, that prayer was answered. In my final year, a lecturer announced that those interested in becoming pharmacists in academia should raise their hands. I volunteered and was subsequently accepted into the Ibadan campus in 1967. But because we already had a diploma in Zaria, we were given a concession: we were to spend two years instead of three.

Unfortunately, I couldn’t finish; but my other mates – Benjamin Fashanu and Olatunji Ahmadu – finished theirs. I checked out of the school around 1968/1969, after I was advised to withdraw. I knew I had the ability to compete but somehow I allowed myself to give in to temptation and fell along the line.

As children of God, there are some things we just cannot do. In retrospect, I had the rare privilege of knowing the Lord before I clocked 12. That early knowledge of Christ gave me a very special advantage. Therefore, there were things that were not expected of me. That is why I believe my not finishing the course was a form of discipline.

What did you do after your withdrawal from school?

After I was asked to withdraw, I went back into the pharmacy field because I already have a diploma. Besides, I was doing well in class before my withdrawal in 1969. I was seriously depressed and started offering supplication to God for a way out. He finally answered my prayer. In October 1972, I joined Ahmadu Bello University, which had just commenced its maiden pharmacy course in 1970, in pursuit of Bachelor of Pharmacy.

Eventually, I graduated in 1974. I sincerely thank God because I believe it was the Lord’s doing. I know how much insult and ridicule I got when I re-applied to study Pharmacy at ABU. Many were shocked and repeatedly asked ‘Ah! Why are you going to study that course again?’ But I knew it was a sacrifice I had to make.

I recall that the then dean of the campus, Prof. Gabriel Osuide, observed that I was somehow different from other students. He confessed that he could see I had some administrative traits. He then appointed me to be the class rep. Even long after graduation, he wanted to retain me as an administrator. But I opted out because I still nursed the dream to pursue a Ph.D in Bradford, England, which I eventually did (1976-1979).

I don’t know how else to describe my speedy progress. Between 1976 and 1977, my supervisor felt my work was good enough to be transferred to Ph.D. By May 1979, I completed my Ph.D successfully. Prior to my degree programme in ABU, I worked in Kano Civil Service shortly after the civil war (1967 – 1970) when the regions were divided.

God has been with me all the way. I am eternally grateful. Right from my secondary school to university days, I have been a leader in a number of Christian fellowships and religious societies. After my return in 1979, I rejoined the academic staff in Zaria until 2008. At ABU, it is worthy to note that I went through all the cadres – Lecturer I, Lecturer II, Lecturer III to senior lecturer.

In all of these, do you have any regret?

Never. I have no regret for either studying Pharmacy or passing through challenges in the manner I did.

Looking at how far the pharmacy profession has come, are there lessons to be learnt?

Yes, I believe so. There are lessons of patience and continued struggle. It is not enough to just be patient – not with several challenges facing you; you must continue to fight it.

Right from my student days in University of Ife, pharmacists have been fighting the CT Grading. There was intense clamour for pharmacists to be on Scale A salary structure. It never mattered whether you were a degree or diploma holder because it was a technical programme. But the late Prof El Said, dean of Pharmacy, University of Ife, while it was still at Ibadan, fought that his students should be given Scale A salary in the civil service because they deserved it. This is why I always canvass for people not to be satisfied with present state of things.

As an experienced academic pharmacist, how will you advise young pharmacists looking up to you?

Although this may sound ridiculous, I want to thank God for my knowing Christ early. That has a great influence over me. I want to also suggest that we should all endeavour to know God. If you are close to Him, He will direct your path.

Wherever you are or whichever state you are, do your best. Also, consider your area of interest, your area of capability and which arm of pharmacy career you want to choose. For me, it has been academic right from onset and God made it so. Once you are convinced that is where the Lord wants you to go, stick to it until you succeed.

I will also advise young pharmacists not to be satisfied with only first degree. The world is moving. Besides, qualifications matter now, not just pressing buttons. This is because we are dealing with patients who are now more knowledgeable than in the past. Therefore we too must be knowledgeable.

You must also aspire to be a Fellow of the College (West African Postgraduate College of Pharmacists) because, there, you will be trained to gain confidence in whatever area you specialise.

Students should also consider other areas like Institute of Public Analysts of Nigeria (IPAN) to practise. Many pharmacists are not coming for that. Despite our knowledge in drugs, if we don’t register with IPAN, we may not be legally qualified to analyse drugs. We are specialists in this area; but if the official body knows the relevance of IPAN, it will further encourage pharmacists to embrace it. This is even more relevant for those in the industry and academia. It will give them more privileges and job opportunities. 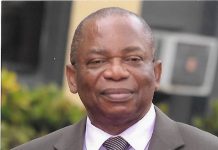