Nigeria has recorded 661 more positive cases of coronavirus (COVID-19) – one of the highest figures reported so far in the country, making the total number of cases now 19,808.

This was confirmed by the Nigeria Centre for Disease Control (NCDC) in a tweet on Saturday night, saying 19 more people died of complications related to the disease. 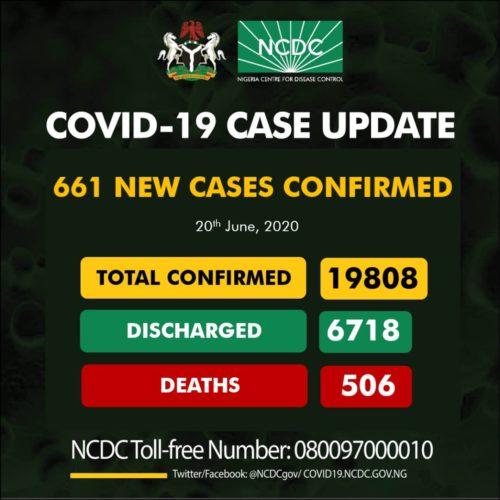 Giving a further update on the outbreak of the disease, the health agency noted that the new cases were reported in 13 states across the country and the Federal Capital Territory.

It added that Nigeria now has a total of 19,808 confirmed cases of COVID-19, out of which 6,718 have been discharged with 506 others dead.
Of the new cases, Lagos has the highest with 230 infections, followed by Rivers and Delta States which reported 127 and 83 more cases respectively.

With the latest update on COVID-19 in Nigeria, Lagos now has a total of 8,407 cases, followed by Abuja and Kano which have 1,549 and 1,184 infections respectively.

According to the agency on its Twitter page, it says: “On the 20th of June 2020, 661 new confirmed cases and 19 deaths were recorded in Nigeria

READ
NAFDAC to Tackle Use of Azo-Dyes in Palm Oil, `Sniper’ as Food preservative, Others