Nigeria broke a new record on its daily count of coronavirus infections on Friday, with 796 new cases recorded in 15 states and the federal capital territory (FCT).

The Friday figure is the highest daily count so far since the virus was first confirmed in Nigeria on February 27, 2020.

The Nigeria Centre for Disease Control (NCDC) confirmed the new cases in its update for December 11, 2020. 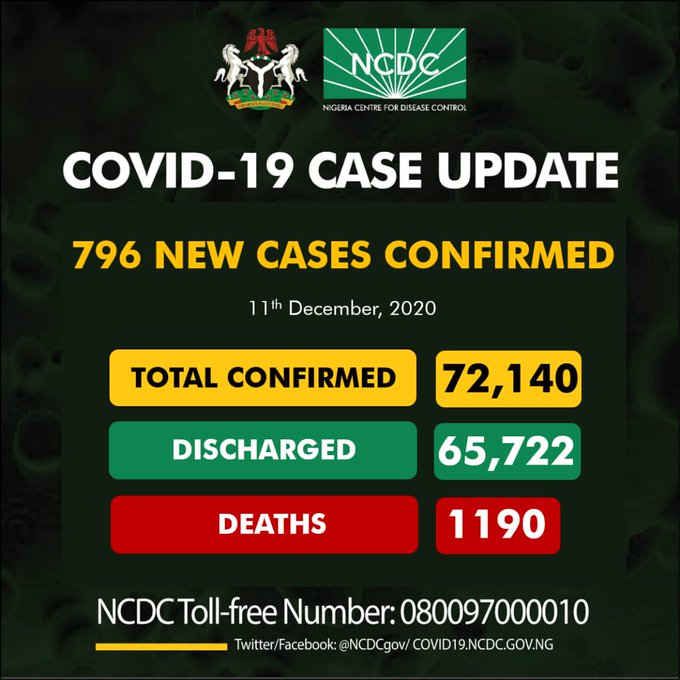 According to the breakdown by the NCDC, FCT recorded the most cases with 258 new infections, followed by Lagos with 248, and Kaduna with 117.

In spite of the breakthrough in vaccine production worldwide, the new daily record comes amid concerns of a second wave of infections, as predicted by the presidential task force (PTF) on COVID-19, and the World Health Organisation (WHO).

However, despite the record number of cases, no new death was confirmed on Friday, leaving the fatality toll at 1,190.

Meanwhile, the daily count of recoveries increased slightly with 248 patients discharged on Friday, increasing the total to 65,722.

A total of 72,140 COVID-19 infections have now been confirmed across the country.

Nigeria Has No Case of Omicron COVID, Says NCDC