Dean of the Faculty of Pharmacy, Obafemi Awolowo University (OAU), Ile-Ife, Osun State, Prof. (Mrs) Margret Olubunmi Afolabi, has stated that the faculty has not lost its reputed glory, despite the several challenges that have besieged it over the years.

Afolabi said this during a recent interview with Pharmanews, against the backdrop of inadequate funding in many federal universities in the country, which she said has led to infrastructural decay for years

She added that this was one of the frustrations that led to the on-going protracted strike by the Academic Staff Union of Universities (ASUU).

First established as a Department in the former Nigerian College of Arts, Science and Technology, Ibadan Branch, in 1957, OAU pharmacy faculty is the first of such in the country, with an enviable record of having produced many notable pharmacists over the years.

Afolabi maintained that despite infrastructural challenges that have affected the learning environment, compared to the early days of the faculty, the faculty still retains its tradition of excellence, stressing that this is a top priority for the management.

According to her, “The major bane now, which is the main reason for the ASUU tussle with the Federal Government, is the problem of resources to work with in an academic environment. I have been in the Faculty of Pharmacy in OAU for decades now. People of my calibre witnessed the heydays of research in an academic environment. But for you to now see the way the equipment and facilities are degenerating, without replacement or repair is a great cause for concern.

“When you hire an employee and the instrument is not there for him to work, then the employee will not be motivated to work. This is the situation in public universities in Nigeria now and my faculty is not an exception; but in spite of the challenges, we are still moving on.”

The dean who reiterated that the faculty remains “the great Ife Pharmacy”, further said: “The faculty has been producing great Pharmacy graduates for about 60 years now. Most of the pharmacists you see in some of the schools of pharmacy in the country today graduated from this faculty. Most of the products of the faculty are in various works of life, doing exploits in the industry, in the hospital; some are into community practice, and media, among others.”

She however applauded the efforts of some alumni members for coming to the aid of the faculty with the provision of certain infrastructure.

She said: “I must say that this faculty is very lucky. As I said earlier, many of our graduates are captains of industry. They are seasoned professionals, politicians. Some of them have diversified into media, some into telecommunications and they are breaking grounds in such environments. So, some of them decided to assist us with certain infrastructure. They come as individuals; they also come as a class set.

“The people we have trained in this faculty are really giving back with legacy projects. For instance, two class sets donated two different boreholes to the faculty. So we now have two different boreholes for uninterrupted water supply in the faculty.  Another set came up and donated a high power generator for the faculty, so that we don’t depend on the national grid. Because if work is going on in the laboratory and in the course of an experiment, there is power outage, it could disrupt what one has been doing for hours. So, these are some of the areas that our alumni are coming to support us to sustain the status and integrity of the faculty that trained them.”

Afolabi added: “The government gave us a building through Tetfund but it was an empty building and for a very long time, we couldn’t make judicious use of the building. But our alumni have started coming back to furnish the building for us. A class set donated a boardroom and furnished it for us. Another set also furnished one of the lecture theatres, which is currently in use by the students.

“Then another set decided to provide Wi-Fi and a projector for us. Again, another set donated solar inverter for energy generation, so that we will not be distracted by power outage while lecture is going on and they also ensured that there is power point projector for lecturers to project their lectures. This is how we have been managing in the faculty.”

The dean however challenged the government to take urgent measures to save the public university system in the country from total collapse, noting that it is not normal for a federal university to rely solely on its alumni for provision of infrastructures.

According to her, “Some of our old students are also equipping our laboratories but we can’t continue to depend on them 100 per cent. Government intervention is still very crucial and this is the reason ASUU is crying out with a unified force. We are only hoping that the narrative will change anytime soon. The time for the government to act is now.”

In the same vein, Afolabi, who is a professor of Pharmacy Administration, called on all pharmacy graduates from the faculty to use the quality training they have received to create a niche for themselves.

She said, “Pharmacy is a noble profession and it is a lucrative one. What you make out of your training depends on you. What you make out of the tools you have been given depends on you. The curriculum of pharmacy is very broad. In which case, we take our students through various aspects of life and disciplines. There is Chemistry in Pharmacy, there is Pharmacology, there is Microbiology, and there is Business Management, as well as Public Health.

“There is also Pharmacognosy, which focuses on anything about herbs or natural products. All these we try to impart to the students within five years of their training. But after the training, a wise one needs to sit down and think about the area to explore. This is the only thing that will make you, as a pharmacy graduate, to stand out, by creating a niche for yourself.

“Like I mentioned, there are some of our graduates that are into agriculture. Some are into robotics and some are computer gurus. Some are in the industry. So, for you to make it, it depends on how best you make use of these tools and training you have been subjected to.” 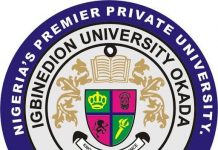 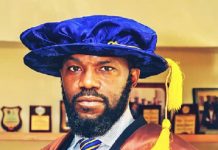 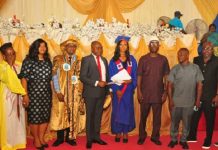