-Urges him to be constitutionally minded

The Immediate Past President of the Pharmaceutical Society of Nigeria (PSN) Pharm. (Mazi) Sam Ohuabunwa, has officially handed over the leadership baton of the Society to the newly elected president, Prof. Cyril Usifoh, on Thursday, at the National Secretariat, Anthony Village, Lagos.

Ohuabunwa, who expressed his delight in having an ideal pharmacist as his successor, said unlike some predecessors who still wish to linger in office  for sometime after the expiration of their tenure, noted that he doesn’t have such ambition, as he is eager to allow the new president commence his administration in fullest without any obstruction.

He appreciated God for His benevolence in completing his tenure successfully, although he might not have achieved everything he wished to have attained for the profession, but he and his team did their best.

Presenting the handover note to the new president, he counselled him to embrace the constitution in all his dealings for the profession, as well as do everything with Godly reverence and a sense of duty to the profession. 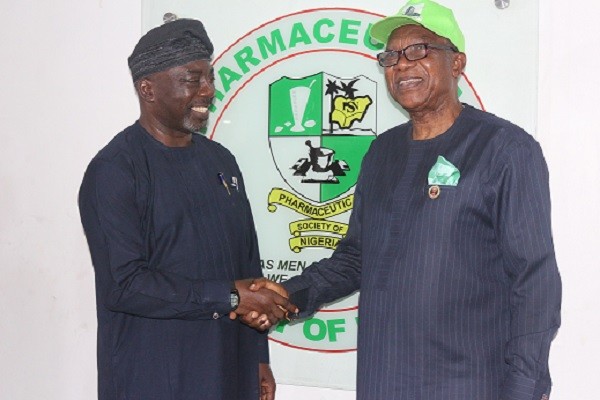 He said: “I feel highly pleased and it doesn’t happen often that you are happy to be succeeded. There is always this feeling that you should be in lure of office that you should stay one month or thereabout in office more. But for me there is nothing like that, because I’m always running and whenever I leave,  I’m usually begged to come back, but I don’t always return because there is always something ahead of me to pursue.

“So I’m glad God granted me the grace to finish well. I thank God also for keeping us to finish the three years in sound health for running the profession very well. We might not have achieved everything we wanted but we tried.

“More importantly, that people succeeded you and you are wondering if that is the best you could have. To be sincere, there were four gentlemen running the race, and any of them could be the president, but God in His infinite mercy had chosen whom I believe is the best among them all. For me it gives me joy because I’m proud to say I’m succeeded by so so and so, who already had cut for himself a niche in the field of Pharmacy, which is the academia.

“My advice to him is to be even-handed, to show love, to follow the constitution and to trust God. He should do things out of fear of God and out of love for the profession. He shouldn’t worry about who claps for him and who doesn’t. There is a price for leadership because not everybody will support you. Even because of what you are doing well, some people are going to be opposed to you because you are doing well, just for being jealous. He should rise above that and he will be successful. He should use all the resources at his disposal’, the former president stated.

In his response, Prof. Usifoh thanked God for the privilege to serve in such capacity, saying he will commence his administration with a retreat for NEC members for proper mapping out of strategies for their tenure.

For pharmacists whose candidates didn’t emerge as president, he assured them of an all inclusive administration that no one is going to be left out.

“It is the Lord’s doing that I’m elected and handing over has been done. It is actually a call to service. I have served in various capacity and I’m fortunate to have team members who are willing to serve. We are going to hit the ground running and I’m going to start with a retreat, to enable me educate NEC members on how we are going to work and brainstorm on the blueprint of what we want to do.

“To me we are all victors, we are going to work together as men of honour. It is a joint work, all of us we work together, it’s a Pharmacy family..