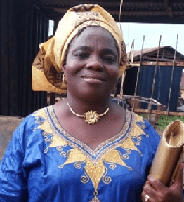 Mrs Catherine Eseine is the director of nursing services (DNS) in Esan Central LGA of Edo State, and chairman of National Association of Nigerian Nurses and Midwives (NANNM) Edo State chapter. In this exclusive chat with Pharmanews, Nurse Eseine speaks on various burning issues among nurses, including the importance of home-based nursing care and the need for nurses to embrace teamwork, describing it as a means of facilitating better healthcare services to patients. Excerpts:

When did you become position the state NANNM’s chairman, and what motivated you to vie for the office?

I became the chairman of NANNM Edo State chapter on 23 October 2015, after my victory at the delegate’s conference that day in Benin City. My motivation stems from a long-time desire to serve my colleagues. I had often held leadership positions from my days at school and since I joined the service. I had served as a two-time vice chairman of the National Union of Local Government Employees (NULGE), Esan Central Government chapter, as well as being chairman of the Forum for Local Government Nurses and Midwives (FOLGONM) Edo State chapter.

It is interesting to be able to surmount some seemingly impossible  challenges with the help of God and my colleagues in order to bring smile to some faces. When the opportunity came to move up to NANNM, I decided to take a bold step and I won the election.

What are your goals for nurses in the state?

My goals for nurses in the state include ensuring unity among nurses in the various units in the state, whether at the local government, state or federal health institutions; enhancing the welfare of all nurses through prompt response to issues affecting them; bridging the gap between management (our employers) and our members; ensuring that salaries and other benefits due to nurses are given to them through dialogue and negotiation; and ensuring that the NANNM House, which belongs to every nurse in the state, is given a facelift.

I will also work towards promoting the good image of  nurses and the nursing profession; while ensuring there is harmonious relationship and synergy between NANNM and other unions in the state.

International experts in nursing are advocating collaborative nursing, as a way to boost nurses experience .They advise other nurses to collaborate with nurses and non-nurse specialists, for a better patient outcome. Is this practicable in our clime?

Collaborative nursing is very important and practicable in an enabling environment. Health in general requires a team approach because no one can do it alone. Even within nursing, there are various areas of specialisation. Each one needs to collaborate with others to enhance better health services to the patient.

Domiciliary midwifery is also an age-long practice. The major challenge to home-based care is the dearth of nurses in our facilities. Most facilities do not have adequate number of nurses to cover the patients even in the hospitals. Most hospitals do not have a health visiting unit to provide home-based services. However, it is practicable and encouraged.

There is an ongoing campaign for nurses to upgrade from being diploma holders to degree holders. Is online nursing training programme acceptable for your members,  since affords them the opportunity to further their education without losing their present careers?

The ongoing campaign for nurses to upgrade from being diploma holders to degree holders is a welcome development and supported by NANNM. Online nursing programme is acceptable if backed by necessary recognition by the Nigerian University Commission (NUC). All institutions which run nursing programmes must be accredited by NUC and Nursing and Midwifery Council of Nigeria (NMCN) to be acceptable in the country.

Recently, Edo State nurses, particularly the UBTH members have been in the news lamenting the kidnap of their colleagues. What can you attribute to this negative development and what were the steps taken to address the situation?

The negative development of kidnapping nurses is most unfortunate. You will agree with me that there is a general hike in the level of criminal activities in the country, which could be attributed to the various cycle of poverty, unemployment, laziness, get-rich-quick, syndrome and other vices. Nurses are perceived to be of high status with fat take-home pay at the end of the month. Some individuals could also have negative perceptions about nurses and thus want to carry out such criminal activities.

In response, NANNM has written to security agencies informing them of this ugly development. There was also a protest match to the Crown Prince of Benin Kingdom, community and other leaders to sensitise them and seek their support in putting an end to this ugly trend.

In view of this development, what is the plan of the state’s NANNM to boost the security apparatus of nurses, especially when on duty?

The issue of security is a national one. However, NANNM is discussing with security agencies particularly the Police on the need to beef up security and surveillance around certain places. We are also discussing with the management of hospitals to have security services in and around the hospitals.

We are also using this medium to appeal to churches, mosques and the general public to enlighten their members on the dangers of kidnapping and that they should learn to see nurses as their friends. We call on all vigilante groups around these areas to help protect our nurses. Nurses also need to be more vigilant and security-conscious in and outside their work environment. 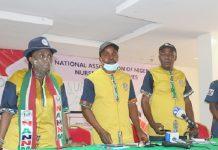 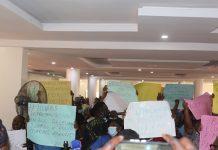