Worried by the geometric rate at which Hepatitis B is spreading among Nigerians, with the prevalence rate of 20 million Nigerians living with condition, according to World Health Organisation (WHO)’s data, Pharm. Obiageri Ikwu, a community pharmacist and managing director, Lopez Pharmacy and Stores, Lagos, in collaboration with Zolon Healthcare, recently organised Hepatitis B advocacy, awareness and training programme for community pharmacists in Oriade and Amuwo Odofin Zones of ACPN.

The training programme which was held at TFC Fastfood, Festac, Lagos was aimed at empowering community pharmacists and to ensure that they become Hepatitis B advocates, as well as help people to get vaccinated.

Speaking at the programme which had in attendance over 100 community pharmacists from Oriade and Amuwo Odofin Zones of the ACPN, Pharm. Ikwu, emphasized the importance of training, saying the aim was to train as many community pharmacists as possible and turn them to Hepatitis B advocates, so that they can help carry the hepatitis message across, and ensure that people get screened and vaccinated.

Speaking further, Ikwu noted that the community pharmacists, being the closest healthcare providers would be useful in championing the cause of eradicating the scourge of viral hepatitis b because of their knowledge, thereby emancipating Nigeria from the claws of hepatitis, which is in line with the WHO’s goal of viral hepatitis elimination by the year 2030.

“In Nigeria, studies have put the burden of Hepatitis B in most Nigerian cities to an average of 13 percent translating to an estimated 20 million people infected. This means that at least one of every 10 Nigerians is a chronic carrier of Hepatitis B and not only at risk of liver diseases and death but also at risk of transmitting it to others”. She stated

The guest speaker, Mrs  Ugochukwu Doris Ayika, a public health nurse, and Health Marketing Officer, Zolon Healthcare Limited, said that the biggest obstacle confronting Hepatitis B treatment in Nigeria is not the virulence of the disease virus or even the spread of the disease but a lack of awareness among Nigerians  on the importance of discovering their Hepatitis B status, adding that there is also the issue of not knowing what to do, where to go to, and who to see, when it comes to hepatitis.

She, therefore, called on the community pharmacists to get involved in the fight in order to reach the masses quickly, noting that the masses need to face the reality of the disease and start taking responsibility for their health.

Overeating is not the Major Cause of Obesity – Experts 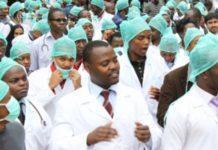 FG to Recover Millions of Naira Wrongly Paid to 588 Doctors