The Vice-Chairman, Pharmaceutical Wholesalers and Distributors Association of Nigeria (PWDAN), Pharm. Ogeneochuko Omaruaye, has said that holistic sanitisation of the pharmaceutical supply chain as well as proper regulation, are the major steps toward ensuring a consistent flow of quality and affordable medicines across the country.

Omaruaye, who is also the managing director, New Height Pharmaceuticals Limited, noted that the growth of the wholesale distribution sector of the pharmaceutical supply chain is hampered by poor infrastructure, lopsided regulation from the regulators, lack of political will on the part of the government, as well as unprofessional conducts on the part of the practitioners.

He made the submission at the 6th anniversary of Safco Mega Solutions, a pharmaceutical and healthcare wholesale distribution pharmacy, located in Ajah, Eti-Osa Area of Lagos. The event, held virtually and physically, was attended by dignitaries and staff members.

He continued, :“If I am pouring clean water into a drum and someone is pouring dirty water into the same drum, no matter how clean my water is, the whole water will become unclean, so if they regulate the wholesalers to the point where they are trying to pour clean water into the system, but they  leave others  in the same system to be pouring dirty water, the whole water won’t be clean and it would be very difficult to differentiate between the clean water and the dirty one that has been poured together”.

Speaking on the 6th anniversary of SAFCO, Omaruaye congratulated the company and commended the leadership style of the chief executive officer, Pharm. Bayo Afon, for sustaining the company despite the challenges it had encountered, especially at this critical period.

The respected pharmacists while applauding the SAFCO boss for conceiving such a big vision, said he was highly impressed with the level of discipline and tenacity of purpose displayed so far by the management team and staff in the last six years.

“As a person, he has proved himself to be credible and dependable, so it is my sincere prayer that the business will grow and become a model for others nationwide to emulate. We can only wish him years of success. Six is just the beginning, so we hope he celebrates more as much as 50 by the grace of God”, he said.

Speaking in the same vein, Pharm. Kayode Ayegbajeje, HR manager and Regulatory Affairs Officer, SAFCO, congratulated Pharm. Afon, and described him as an exceptional and dedicated professional who has weathered the storm to stay afloat. He also extolled the virtues of hard work and dedication which has seen the company become a force to reckon with in the pharmaceutical wholesale space in the country.

Speaking further, Ayegbajeje noted that the company has changed from what it was when it started, as there had been a great improvement, adding that he was impressed with the way and manner the company operates and the dedication of the staff which he said has contributed to what company has become. “The improvement is tremendous and it’s in conformity with the modern practices as people now book, order and make payment online, without having to come here physically, and our drivers, as well as our riders, are also on alert as they ensure that every order gets to its destination under 28 hours.

On the peculiar challenges facing the business, he noted that the environment is chaotic, adding that the charlatans are smiling to the bank, while the professionals are at the receiving end.

As a company, despite the price of diesel, we have to be on generator a greater number of hours daily, the air conditioners must be working perfectly, the required temperature of the drug area must be maintained, and yet someone somewhere doesn’t do all of these, especially those in Idumota Market, they sell drugs as if they are selling shoes, and still make more money than those of us who are doing it rightly, it’s worrisome.

Speaking at the event, Pharm. Adebayo Afon, managing director, Safco Mega Solution, who traced the genesis of the company to his desire to make a difference in wholesale pharmaceutical service and community practice thanked all those who have supported his vision, noting that even though it was not easy, he has remained undaunted in his resolve that things can be done right and professionally.

Afon, who was a former vice-chairman of the Association of Community Pharmacists of Nigeria (ACPN), Eti-Osa Zone, noted that he had been concerned about the challenge of an ineffective supply chain system, which he had traced to a monopolistic pricing system, delay in delivery, products hoarding, insufficient products and stiff market conditions imposed on pharmaceutical retailers in Nigeria, saying this had prompted the need start a wholesale line of business and, thus, SAFCO Mega Solutions was birthed.

“As a company, we are committed to the profitability and viability of independent pharmacies, as well as providing support to maintain their positions in the industry. Our competitive edge cuts across efficient customers’ inventory and management, telephone-email-walk-in and door-to-door order systems. SAFCO has been able to bring in some positive changes into the wholesale business and if it comes to rating, we are not doing badly as we have become a force to reckon with in the industry and our turnover has increased tremendously”, he said 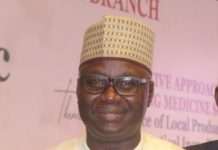