Irvingia gabonensis commonly known as ogbono, or African bush mango, are especially valued for their fat and protein-rich nuts, and highly demanded due to its huge benefits.

The high demand for ogbono is due to its high socioeconomic, nutritional and medicinal values.

Different parts of the world have different names for Irvingia gabonensis for example, it is known as ugiri or ogbono by the Igbo people, biri, goron, goronor by Hausa people, ogwi by the Benin people, mbukpabuyo by the Ibibio and Efik people,  aapon by Yoruba, bobo, manguier or sauvage by French and apioro by the Deltan people.

According to numerous studies, the ogbono seed or kernels have been shown to contain about 18 amino acids with a good number of nutrients, vitamins and minerals such as calcium, magnesium, potassium, sodium, phosphorus and iron.

A lot of research have been carried out to ascertain the medicinal, nutritional and other benefits of Irvingia gabonensis.

Paul Anegbeh, a researcher with the World Agroforestry Centre, agreed that the Irvingia fruits are utilised both in modern and traditional medicine for treating several diseases.

Some benefits of ogbono as established by studies include:

Edible Purposes
Irvingia gabonensis fruit can be eaten as fresh fruit. The sweet pulp can be juiced or used for making smoothie, jelly, jam and wine. The seeds can be pressed for vegetable oil or margarine. The dried ogbono seeds can be ground and used for preparing ogbono soup, stew gabon chocolate and dika bread.

Weight Management
Studies on African mango revealed that it suppresses hunger and as such very essential for people that want to minimise their food intake. Reduction of food and caloric intakes help to maintain a healthy weight. Ngondi et al., (2005) evaluated the efficacy of Irvingia gabonensis seeds in obesity management.

Antibacterial and Antifungal Properties
Kuete et al., (2007) admitted that the methanolic extract of Irvingia gabonensis can be used for treating bacterial and fungal infections.

Dye Production
The fruit pulp can be used for producing black dye for dyeing cloths. Both the roots and barks also contain tannin, which is suitable for dyeing.

Cosmetics Production
pressed ogbono oil can be used for making cosmetics and soap. The bark can be used for treating scabby skin. The powdered kernels can be applied on the skin as a cosmetic to make the skin less oily.

Prevents Constipation
Being a rich source of dietary fibre, ugiri fruit can be eaten to improve bowel functioning and for preventing constipation. 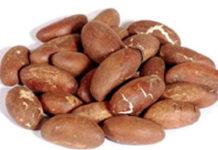