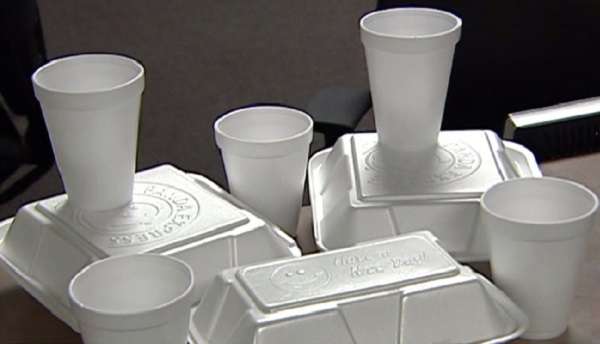 Environmental experts have appealed to the state and federal governments to ban the use of styrofoam containers in Nigeria saying that it causes havoc to the environment and human health.

They made the call in separate interviews with the News Agency of Nigeria on Sunday in Lagos.

Styrofoam is a kind of expanded polystyrene used especially for making food containers.

They urged the three tiers of government to ban the usage of styrofoam containers in the country because chemicals can leach into them and contaminate food, affecting human health and reproductive systems.

An environmentalist, Mr. Alexgreat Akhigbe, the founder African Cleanup Initiative, said that styrofoam is causing huge havoc to human health and pollution to the environment.

Akhigbe said that the major problem with styrofoam is that no one had been able to pick up the used ones for recycling into other items.

He added that styrofoam had not been getting any attention from people because it does not have a recycling value.

“I think, for now, some cement companies have been able to collect this kind of waste together and others that are not recyclable so they can use it for production.

“Apart from these companies, we don’t have any recycler that will take the waste, that is why we have them littered all around,” he said.

“The country does not have policies on the ground to check this menace.

“For instance, if I were to be in government, I will have a conversation with those people producing this styrofoam, and tell them to have a plan of recovering the waste product from the street.

“They cannot come and dump waste into the society to make money.

“So, they should have a plan of sustainability when it comes to recovering this waste from society,” he said.

He pleaded with the governments to check this menace.

Another environmentalist, Mr. Emmanuel Emechete, told NAN that the styrofoam containers used by food vendors had little or no recycling value.

“If it can be banned, it will be more helpful because it ends up causing havoc to the environment. It gets littered in the gutters thereby causing a blockage.

“Yes, we know it is very cheap and due to the economic situation in the country, people prefer to use it but apart from causing environmental hazards, it also has health implications on humans.

“Chemically, they are harmful because it contains chemicals that are not good for the body.

“For instance, when you put a hot soup in styrofoam, you will discover that some part of the styrofoam is already melting into your soup because it is very light.

“All these chemicals affect the lungs and kidneys,” he said.

He called on the government to ensure the circulation of styrofoam containers is minimal to avoid more environmental and health hazards.

Some users of the styrofoam told NAN that it was in circulation because of high demand and cost implications.

A food seller, Mrs. Kudirat Olawunmu, who spoke with NAN, said that people prefer to buy their food in styrofoam containers because it is cheap.

“If I get the other plastic plates, people won’t buy them because it is expensive,” she said.

Another food vendor, Miss Kadijat Ibrahim, said she does not use any other takeaway pack than styrofoam.

“Although I know this styrofoam is always littered everywhere even in the gutters too after use there is nothing we can do about it,” she said.

Another food vendor, Mr. Shola Asumo, when asked why he preferred to use styrofoam packs over any other takeaway plate, he said he used them due to popular demand.

“When I ask my customers which takeaway plate they want, most of them prefer to go with the styrofoam because it’s cheaper.

“I also have the other takeaway plates but it is only a few people that request them,” he said.

Another food vendor, Micheal Onyebuchi, while speaking with NAN, said that the styrofoam pack is easy to handle, light, and cheap, adding that he can not use any other takeaway pack.