The average parent criticises his or her children as many as eight times for every time he or she praises them.  Parents criticise their children unthinkingly in an attempt to get them to improve their behaviour.  But exactly the opposite occurs. Because destructive criticism undermines thechild’s self-esteem and weakens his or her self-concept, effectiveness decreases rather than increases. The child’s performance gets worse, not better.

Destructive criticism makes the individual feel incompetent and inadequate. He or she feels angry and defensive and wants to strike back or escape. Performance nosedives. All sorts of negative consequences occur. Especially, the relationship between the parent and child deteriorates.

Children who are criticised for their schoolwork soon develop a negative association between schoolwork and how they feel about themselves. They begin to hate it and avoid it whenever possible. They see schoolwork as a source of pain and frustration. And because of the Laws of Attraction and Correspondence, they begin to associate with other children with the same attitudes.

Often people make the mistake of thinking they are giving “constructive criticism” when they are really just tearing the other person down and calling it “constructive” to rationalise their behaviour. True constructive criticism leaves the person feeling better and more capable of doing a better job in the future. If criticism doesn’t improve performance, by increasing the individual’s feeling of self-esteem and self-efficacy, then it has merely been a destructive act of self-expression carried out against someone who is not in a position to resist.

Destructive criticism lies at the root of many personality problems and of much hostility between individuals. It leaves a trail of broken spirits, demoralisation, anger, resentment, self-doubt and a host of negative emotions.

When children are criticised at an early age, they soon learn to criticise themselves. They run themselves down, sell themselvesshort and interpret their experiences in a negative way. They continually feel, “I’m not good enough,” no matter how hard they work or how well they do.

The whole purpose of criticism, if you must give it, is “performance improvement.” It is to help the other person to be better as a result. Constructive criticism is not done for revenge. It is not a vehicle to express your displeasure or anger. Its purpose is to help, not hurt, or you should refrain from using it at all.

Here are seven steps you can follow to ensure that what you are giving is “constructive feedback” rather than destructive criticism.

First, protect the individual’s self-esteem at all costs. Treat it like a balloon, with your words as potential needles. Be gentle. With my children, I always begin the process of correction with the words “I love you very much,” and then I go on to give them the feedback and guidance they require to be better.

Second, focus on the future, not the past. Don’t cry over spilled milk. Talk about ”What do we do from here?” Use words like “Next time, why don’t you … ”

Third, focus on the behaviour or the performance, not the person. Replace the word “you” with a description of the problem.

Instead of saying, “You are not selling enough,” instead say, “Your sales figures are below what we expect. What can we do to get them up?”

Fourth, use “I” messages to retain ownership of your feelings. Instead of saying, “You make me very angry,” instead say, “I feel very angry when you do that,” or, “I am not happy about this situation and I would like to discuss how we could change it.”

Fifth, get clear agreement on what is to change, and when, and by how much. Be specific as well as future-oriented and solution-oriented. Say things like, “In the future, it’s important that you keep accurate notes and double-check before you make shipments final.”

Sixth, offer to help. Ask, ”What can I do to help you in this situation?” Be prepared to show the person what to do and how to do it. As a parent, or if you are in a position of authority, one of your key jobs is to be a teacher. You can’t expect another to do something different without instructing that person how it is to be done.

Seventh, assume that the other person wants to do a good job and that, if he or she has done a poor job or made a mistake, it was not deliberate. The problem is limited skill, incomplete information or a misunderstanding of some kind.

Be calm, patient, supportive, sensitive, clear and constructive rather than angry or destructive. Build the person up rather than tearing him or her down. There’s probably no faster way for you to build self-esteem and self-efficacy in others than by immediately ceasing all destructive criticism. You will notice the difference at once in all your relationships. 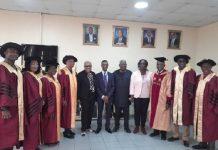