It was harvest of encomiums for the Lagos State ALPs Chairman, Pharm. (Mrs) Modupe Alli, who successfully retired from active service on her 60th birthday on Thursday, as she also handed over to a new chairperson of the chapter after a free and fair election on the same day.

The three-in-one occasion, held at the Secretariat of the Pharmaceutical Society of Nigeria (PSN) Lagos State Chapter, witnessed a massive turnout of lady pharmacists and special guests of the celebrant. 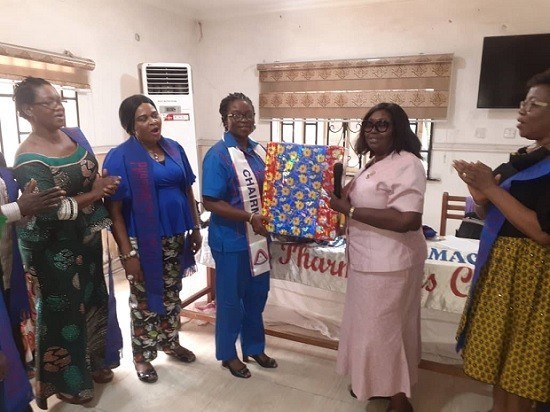 Congratulating Alli on her milestone achievements, Pharm. Iyiola remarked that she has got outstanding performance on all fronts, from her leadership of ALPs, to decades of service at the National Orthopedic Hospital Igbobi, without any incriminating record, and attainment of 60 years. He prayed God to grant her many more years in sound health and greater impact. 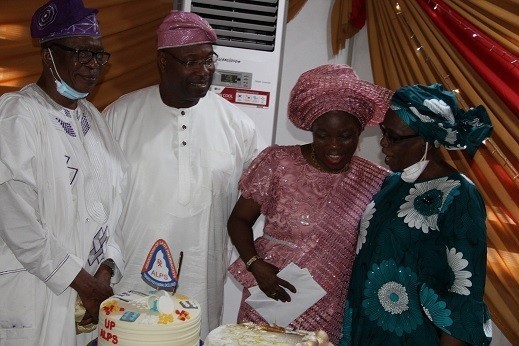 Obono, in her own remarks expressed great delight in witnessing such occasion, as she and the celebrant have been together for over 30 years at the same institution. “Mrs Alli is a colleague we have spent 30 years or more together. We have worked together as professionals, we share so many things together, and she played a very significant role in the completion of Igbobi’s DRC building. She is an epitome of success in career and home front. We pray that the decades ahead will be more glorious”.

For Chief Yetunde Moroundiya, the celebrant is a paragon of efficiency, success, organization, with eyes for details. On behalf of other Alpians, she prayed for more grace for her while appreciating her husband for his patience in allowing her time for the association’s activities.

Prof. Odukoya, on the other hand portrayed the other side of Alli, as a disciplinarian and very diligent person, who is friendly and flexible in her dealings. She narrated how committed Alli was to ALPs programmes that she would personally send her an invite for every meeting, of which Odukoya found difficult to meet up all.

Dr Lolu Ojo also joined the applauding chorus for Mrs Alli, whom he described as an amiable classmate of 41 years, since their sojourn at the Obafemi Awolowo University, portraying her as a beautiful soul in and out, who will stop at nothing to see that her environment is peaceful.

Many other guests and friends of the celebrant were not excluded in expressing their goodwill messages to her, mentioning different qualities and character that endeared her to them, as they advised her to keep up her good works in mentorship of secondary school girls, caring for the less privileged, and the elderlies.

Appreciating her guests who suspended all their busy schedules to come and felicitate with her, the out- going Lagos ALPs chairman, couldn’t hide her joy saying she was so excited and fortunate to be surrounded by such a host of caring people. She thanked God for giving her the opportunity to achieve such milestones over the last sixty years of her life.

“It’s good to be flexible when it comes to religion, I think it’s about character. I always thank God for the privilege to work with the Igbobi team, they are highly professional people. Although it was highly challenging as there was always intellectual arguments on every issue to arrive at the best professional approach to all procedures, I enjoyed all the moment I spent with them.

“I’m also grateful to God for giving me the opportunity to serve as ALPs chairman, though I initially turned down the offer, but I later consider it as a privilege to serve the profession and humanity. Yes, the 4 years wasn’t easy for me, but I blessed God it was a successful tenure”, she stated.

Prior to the retirement ceremony, the Lagos ALPs had her AGM during which election into the position of the chairman was conducted between two candidates of Pharm. (Mrs) Hafusat Adesina and Pharm. (Mrs) Ngozika Okoye. Adesina won with 72 votes against 20 votes for Okoye. Other positions were nominated unopposed. Other newly elected executives are: Mrs Yewande Olorunshola as vice chairman; Dorcas Nyalas Omeire, general secretary; Mrs Adetutu Oyawale, as welfare officer; Ms Margaret Chibututu, as assistant welfare officer; Mrs Abimbola Falope-Lawal as PRO; Miss Onyeka Fiona Eboh as assistant PRO, Pharm. (Mrs) Foluke Akinniranye, as chief whip and others.

In her acceptance speech, the newly elected chairperson appreciated all that made the occasion a possibility, while assuring all members including her opponent and her supporters that she is going to run an all-inclusive administration.

She also seized the avenue to reiterate her 7-point agenda for the progress of the association. They are as follows: 1. Facilitate dynamic mentoring for young ALPians.