A new report by the Cervical Cancer Free Coalition entitled, “Crisis Card,” has estimated that about 26 Nigerian women die of cervical cancer daily.

Also, the Crisis Card stated that India had the highest number of women dying of cervical cancer in the world, while Australia, with one of the highest HPV vaccination rates, recorded the least cases.

Countries with the worst indices on the list include India, Brazil, Bangladesh and Nigeria.The report stated that these four countries accounted for 50 per cent of the total number of cervical cancer deaths in the world.

The Crisis Card ranks over 50 countries across the world based on the number of deaths from cervical cancer and the mortality rate from this preventable disease.It also stated that cervical cancer kills an estimated 275,000 women every year and 500,000 new cases were reported worldwide.According to the report, this preventable disease is the second largest cancer killer of women in low and middle-income countries.

The Executive Director of CCFC, Dr. Jennifer Smith, said though cervical cancer is a vaccine preventable disease, it was still killing women in many countries in Africa and Asia.She said, “Cervical cancer is a preventable cancer, yet we are still seeing so many deaths around the world. We are working towards building networks across the globe, to help support our common goal of a world free of cervical cancer. Together, we can dramatically reduce this disease through vaccination, screening and education.”

Speaking on the need to fight this disease in Nigeria, experts say many women are diagnosed with the disease every year in the country, and call for a renewed commitment from the government toward eradicating the disease.

According to the Crisis Card, “Twenty-six Nigerian women lose their lives, due to cervical cancer, every day and a further 14,000 women are diagnosed each year with this disease. Cervical cancer can be almost entirely prevented through the use of vaccines that are being used around the world.

“Early screening methods and prompt treatment are also critical interventions that can save women’s lives. What is required of us all is a renewed commitment to saving the lives of our women and preventing a preventable death.”

The chief executive officer of GAVI Alliance, Seth Berkley, said the organisation would be securing HPV vaccines for some African countries at a reduced or subsidised rate.

Berkley said, “2013 is the beginning of a dramatic shift in women’s health. A new low price for the HPV vaccine has been negotiated by GAVI for countries eligible for support, opening the door for millions of girls in the world’s poorest countries to be protected against one of the leading cancer killers of women. Ghana will be one of the first African countries to receive HPV vaccines this year with GAVI support.” 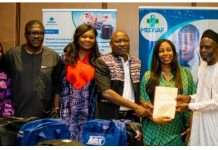