Born on 27 September, 1925, into the family of late Pa Joseph Fadahunsi Fayemi, Senator (Pharm.) Ayo Fasanmi is a frontline politician, though a pharmacist by training. In this interview with Adebayo Folorunsho-Francis, the senator reveals his contributions to the state and national bodies of the Pharmaceutical Society of Nigeria (PSN), as well as why he delved into politics. Excerpts: 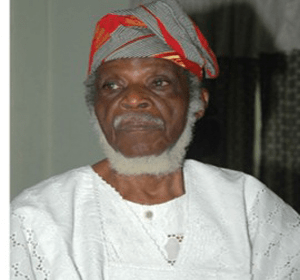 Tell us about your educational background

I gained scholarship into Government College, Ibadan, in 1942, where I passed the Senior Cambridge Examination, with exemption from London matriculation. In 1947, I got admission into the school of pharmacy, Yaba, Lagos, and became a qualified pharmacist in 1950.

What about your work experience?

Was that your last assignment before delving into politics?

Not exactly. After my exit from the GeneraI Hospital, I found a private practice – Bamidupe Chemist – at Osogbo in June 1953. Shortly after, I got married to my late wife, Chief (Mrs) Felicia Adegoke Fasanmi (may her soul rest in peace) and our marriage was blessed with wonderful children. My first daughter is a pharmacist who graduated from Ahmadu Bello University with first class honours in Pharmacy.How did a pharmacist like you get into politics?

How did a pharmacist like you get into politics?

I had always nursed the idea of going into politics one day. After my service in government, I did my job diligently before deciding to serve my people and I had the opportunity to serve in various capacities.

READ
How an Attack in my Sleep Brought me Closer to God - HRH Pharm. (Oba) Falabi

I had been a councillor, both in Ijero Local Government and former Ido-Osi Local Government, comprising the present Ido-Osi, Ilemeje and Mona Local Government. I was member, House of Representatives in the First Republic (1964-1966). I was also a member of constituent Assembly (1977-1978).

I became a senator of the Federal Republic of Nigeria for two terms (1979-1983) before the military took over. Before then, I was chairman of Action Group Youth Association (1962-1965) and national vice chairman, South-West, for Alliance for Democracy (1998-2003).

During the military era, Brigadier Oluwole Rotimi appointed me as a director of Western Nigerian Housing Corporation and I was placed in charge of allocating plots in the Western Region, comprising Ikeja, Oyo, Ogun and Ondo. I personally brought Oroki Estate to Osogbo.

What about your exploits in Pharmacy-related activities?

I was a vice chairman of Pharmaceutical Society of Nigeria (PSN) in Oyo State before being subsequently elected as PSN national President.

Any regrets for studying Pharmacy?

No! In fact, I blessed the name of God for all my achievements in Pharmacy.  Studying it was God’s decision for me. After my London Cambridge Examination (now SSCE), my original intention was to study Law. I had interest in legal practice because back in Government College, I was quite good at debating. It was a period we were privileged to do all the subjects, including arts, commercial and science subjects. I was quite exceptional at English, Government and Literature, except Mathematics, in which my friend, Dr Tunji Otegbeye, was a genius.

One day, something happened. I stumbled on a newspaper with advertisement for enrolment into school of pharmacy (in Yaba). On getting home, I showed it to my father, late Pa Fadahunsi Fasanmi, who was hosting a friend of his. Both of them were impressed and they encouraged me to obtain the form. And that was exactly what I did it. I wrote the examination, passed and was offered admission to the school of pharmacy

During our own time, pharmacists were few in number. The institutions we had were only two – General Hospital in Osogbo and the one in Oyo State. I was in charge of the dispensary in all the local government areas, including Ogbomoso and Osun division. But, to God be the glory, nowadays we have so many pharmacists and many hospitals. And technology has made it easier than the way it was during our time.

Are you saying today’s pharmacy practice is not as beleaguered as the one in your time?

I am saying that in our time, we faced many challenges, but not like the present time. The gravest challenge that today’s pharmacy practice faces is the issue of fake drugs. They are so numerous that you can hardly differentiate between fake and original drugs in our market.

The fake drug challenge has caused a lot of damage in our society; but thank God for government’s introduction of NAFDAC. The effort of this agency has helped a lot. I want the Pharmacists Council of Nigeria (PCN) to continue ridding the society of quacks because there are still many drugstores out there that have no qualified pharmacists. Every store found with fake drugs should be closed down. By doing this, criminality will be reduced in our pharmacy system. Many local drugstore owners have wasted a lot of lives through wrong prescriptions.

What are the lessons to be learned from your various achievements?

Being a former vice chairman in the old Oyo State and later national President of the PSN, I brought a lot of positive changes into the Society. I laid a good example by not stealing money or things that belonged to the Society. I attended many conferences both within and outside the country. During my visitation to some countries, I got and developed some innovative ideas that I brought to the Society when I was still the chairman in Oyo state.  I also organised fundraising for the Society, as well as giving out of scholarships.

I want to appeal to young pharmacists to be devoted to their duty, by shunning corruption. Any society enmeshed in corruption cannot develop.

Were there awards and recognitions you received for all your selfless contributions?

I was conferred with so many honours and awards as a pharmacist. Aside from being honoured with the fellowship of the PSN, I was vested with a considerable number of chieftaincy titles that I cannot start mentioning here, for obvious reasons.

If you had not been a pharmacist, what other profession would you have opted for?

As I said from the beginning, if I had not turned out a pharmacist, I would have loved to study Law. But thank God I have a son who did! He is now the Chief Registrar of Ekiti State High Court.

What is your advice to young pharmacists looking up to senior citizens like you for inspiration?

My advice to young pharmacists is to be devoted to their calling and be focused. To move to the next level, they must be disciplined, shun corruption, and do their duty with the fear of God. They should not participate in any illegality so that when they become old like us, they can say, “I have done my best and leave the rest for the young ones.”