When young Elizabeth Boma Bob-Manuel announced her intention to study Pharmacy in the university, nobody in her family saw it as a big surprise. For someone born of a revered pharmacist father and a mother whose nursing practice was well appreciated in the community, she must have been impressed by the influential synergy exhibited by the commitment of both parents. But in following her parents’ footsteps, the veteran pharmacist resolved not to be a mere “also-ran”; she worked hard to distinguish herself in the profession, until her retirement in 2009 as Rivers State Director of Pharmaceutical Services. In this interview with Adebayo Folorunsho-Francis, the 64-year-old native of Abonnema, Akuku Toru LGA of Rivers State, recalled some notable milestones in the growth of pharmacy practice in Nigeria and reveals why she thinks Pharm.D degree should be the minimum qualification for pharmacy graduates. Excerpts:

How did having a pharmacist father affect your upbringing?

Recalling my growing up years brings back fond memories. I am the eldest in a family of 12 children. My parents ensured that we were well catered for, even though my father was a strict disciplinarian and instilled in us the right moral principles. He worked with big pharmaceutical companies like Pfizer and Eli Lilly, detailing drugs. I was always awed by the type of confidence he exuded whenever he talked, especially about drugs. This contributed to my decision to study Pharmacy in the university. Good education was of utmost importance to my parents; so they ensured that every one of us was well educated. We were also taught the fear of God. We remain a close knit family and I thank God for His numerous blessings.

What about your work experience as a pharmacist?

After I left the University of Ife (now Obafemi Awolowo University), Ile-Ife, I started work as an intern pharmacist in 1974 at the General Hospital,Port Harcourt,and later went to Sokoto for my National Youth Service. On return to Rivers State, I worked in a couple of hospitals and later decided to leave hospital practice. I thereafter proceeded to the UK for a one-year Industrial training programme in drug production at Regent Laboratories,through the sponsorship of the Rivers State Government. This exposed me to Good Manufacturing Practice and, when I resumed duties after my training, I was posted to the Rivers State Pharmaceutical Manufacturing Laboratory, which was responsible for producing drugs for government-owned hospitals.

Can you confidently say that studying Pharmacy was a good decision for you?

Oh yes, there is no doubt in my mind that I made the right decision. If I were to choose all over again, I would still go for Pharmacy. It is a profession that remains relevant all through one’s life.

A veteran pharmacist like you must have gone through a lot. How would you compare Pharmacy in your day to today?

There was more sanity in the practice in my day. This was probably due to the fact that we as Nigerians then had our values right. There was more sanity in the country. People had more respect for the law, unlike what is happening today; so much lawlessness and love of money. Nowadays, people do whatever they like and get away with it. Honesty and integrity have been thrown to the dogs. We cannot isolate Pharmacy practice from the larger society because the profession is practised in this country by Nigerians.

Could you explain this further?

Yes. During my time, a young pharmacy graduate had no problem getting a job because there were so many openings, and we as a country placed premium on education and merit. We were comfortable with what we earned and so had no need to be lawless. However, I must admit that Pharmacy as a profession has come a long way from my time. The curriculum in the schools is better and the general populace is more aware of who a pharmacist is. Today, patient counseling is also commonplace.

Were there no instances of controversies and scandals during your time?

Well, not really. As young pharmacists, we did not have too many controversies because there was mutual respect amongst the different health professionals and we also saw our elders in the profession as role models. However, as the years went by, I started observing so much turmoil in the pharmacy profession. This mainly had to do with patent medicine licensing. Trading in drugs suddenly became everybody’s wish and there was the proliferation of drug stores, both legal and illegal. Many court cases and injunctions emanated from licensing issues and this incapacitated our regulatory body, the Pharmacists Council of Nigeria (PCN). It became a free-for-all affair and pharmacists blamed the Directors of Pharmaceutical Services for their woes since they represented the Council in the states. This led to a lot of distrust between the pharmacists who were the regulated and the DPSs who were the regulators. Our profession suffered a huge setback during this period.

Two major controversies which I cannot forget had to do with problems between the PSN and the PCN – first in 1997, when I first became DPS, and the in 2010. Incidentally, I was made the chairman of the Peace Committee which was set up by the PSN to try and resolve the 2010 issues that concerned PSN representatives in the governing board of the Council. Unfortunately, we did not succeed as there were court cases involved and this really saddened me because it set the practice backwards. Regulatory activities were almost at a standstill as there was no functional investigating panel and disciplinary tribunal. I am happy that things seem to have settled now with the appointment of the new registrar.

READ
Why pharmacists are not good businessmen – Pharm. Adedipe

How best do you think some of the numerous challenges facing pharmacy practice in Nigeria can be curbed?

The challenges are enormous because they come from within and outside. The biggest challenge, as far as I am concerned, is the inability of the government to deal with the problem of drug proliferation and the open drug markets that are all over the place. I am yet to see any country in the world that compares with Nigeria in illegal sale of drugs. There seems to be no political will to address the problem.

One way Pharmacy practice can be improved is if the National Drug Distribution Guidelines (NDDG) can come into effect; but, unfortunately, we are nowhere near implementation. I don’t even know whether many pharmacists know what it is all about. Many have never seen the document and most states are not ready. The appropriate implementation of the National Health Insurance Scheme at all levels will also improve our practice. Luckily, a pharmacist is now the chairman of the Board. I am hoping for improvement.

Another way improvement can come is if pharmacists get more involved in pharmaceutical care and less in trading, as this will distinguish the pharmacist from the quack. This is why the Pharm.D degree should be the minimum qualification for the pharmacy graduate of today. I am a strong advocate of this programme. I think it gives the pharmacist more confidence whether in the hospital or the community.Pharmacists should also get involved in politics so that they can influence policies.

What about the influx of fake and counterfeit drugs into the country?

This problem can be curbed if it is given the seriousness it deserves in this country. The drug markets must be addressed. We cannot have every Tom, Dick and Harry trading in drugs because he can afford it or he seems to feel it is his birthright. We endanger the lives of our people when we ignore this monster. There must be very stiff penalties for violations; those who are caught must be prosecuted. The regulatory bodies concerned should be adequately empowered. How can you address the issue of inspections when there are no vehicles for surveillance, inadequate protection for inspectors and gross underfunding?We can all see that if there is political will we can achieve a lot in this country. The containment of the Ebola Virus Disease in Nigeria is a good attestation to this fact.

Has any PSN president made a lasting impression on you over the years?

The answer is yes. Lady Eme Ufot Ekaette made a lasting impression on me. She was the very first female president the PSN had and she took over at a time when the DPSs and the PSN were at loggerheads. The PPMVL (Patent & Proprietary Medicines Vendors Licence) problem was also rife then and she had a lot of challenges; but she did creditably well. The year she took over the mantle of leadership was also the year I became the DPS of my state and it was also during her tenure that I was made a Fellow of the PSN.

How active are you in pharmaceutical activities?

I have always been fully involved in pharmaceutical activities, especially in my state. Having served as DPS for 12 years, it was inevitable that I got involved as I was the number one pharmacist in the state all those years. It was a big responsibility because the pharmacists looked up to me as the chief implementer of the drug laws. As a Fellow, I give all the support in every way I can to the PSN in the state whenever the need arises and I take part in the activities of the Society.

Were there some major laurels given to you in recognition of your selfless service?

Yes. I had several awards while serving in the Pharmacists Council. I also had Merit Awards from the Association of Lady Pharmacists and NAHAP. There was one from ACPN for being a friend of the Association. I appreciate them all.

How do you see the annual PSN conferences?

I think too many activities are fixed for each day. We do not seem to get the full benefits of the conference because of this since various programmes take place concurrently. Another thing is that many pharmacists just go there to buy drugs and so you find the drug stands very busy while lectures and other programmes are going on in the halls. Apart from these, the conferences are enriching.

I would have opted for Law because I hate injustice.

Is there any particular age an active pharmacist should retire?

I don’t think so. It all depends on the sort of work the pharmacist does and the health status. Some jobs are more strenuous than others. After active service, one could get involved in some part time work in any area of interest. We all know that a sedentary lifestyle is not good for the health.

As an elder in the profession, what is your advice to young pharmacists?

My advice to young pharmacists is that they should know that they have a highly valuable profession into which only brilliant minds graduate and so they should be confident of themselves. A pharmacist’s job affects the lives of people which, therefore, means that the licence should be jealously guarded. Despite the unfriendly environment, any hardworking pharmacist who knows his stuff will succeed. Finally, they should remember that a good name is better than riches. 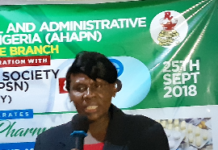