The African Union Commission has called on stakeholders and governments at all levels to connect with People Living With Disabilities to ensure their inclusiveness in all endeavours of life.

Senior Social Welfare Officer, African Union Commission, Mr. Lefhoko Kesamang, made the call on Tuesday while delivering a keynote address at a virtual seminar organised by the African Down Syndrome Network in conjunction with the Down Syndrome Foundation Nigeria.

The News Agency of Nigeria reports that World Down Syndrome Day has been marked annually on March 21 since 2006 to create awareness about Down syndrome.

The 21st day of March was selected to signify the uniqueness of the triplication of the 21st chromosome which causes Down syndrome.

Kesamang said there was wide gap of connection with the governments, stakeholders and society as far as people with disabilities were concerned.

He said that people with disabilities, particularly young adults with down syndrome, should be given opportunity to connect with the governments, stakeholders and the general public in terms of healthcare services, education and employment.

According to him, ensuring their inclusiveness would save the burden of them becoming liabilities and enable them succeed in life and be independent, thereby contribute their quota to nation’s development.

Kesamang reiterated the commission’s commitment to ensuring that the rights of people with disabilities were recognised and protected.

He, therefore, enjoined people living with disabilities to be optimistic irrespective of their health challenges, saying that a day will come when their rights and privileges would be given full recognition.

“Governments and stakeholders should realise that everybody has equal rights and as a result no one should be left behind.

“People with disabilities need to be integrated into every aspects of life to enable them contribute to economic development.

“Regardless of what you are experiencing as a person with disability, do not lose hope, one day your rights will be fully recognised,’’ Kesamang said.

Also speaking, Ms Venesa Dos Santos, the President of Down Syndrome International, called for an end to all forms of discrimination and stigmatisation of persons with disabilities in Africa.

She regretted that over the years, there had been reports emanating from people with disability on the issue of discrimination and stigmatisation.

“It is time for their voices to be heard, it is time to give them opportunity like others and they deserve to be loved and cared for,” she said.

Mr David Bara, Co-Founder, WeCanAccess Ltd. UK, said there was need to provide people with disabilities with the right learning alternatives and materials to enhance their learning capacity.

Bara regretted that some schools did not put into consideration the learning materials of people with disabilities, saying that special schools should establish and equip for people living with disabilities.

He added that people living with disabilities, particularly down syndrome, should be given priority in the distribution of COVID-19 vaccination, as that remained the only fast way to contain spread of the disease.

Earlier, the President of DSFN, Mrs Rose Mordi, in her welcome address appreciated all participants and urged the government to increase the employment quota for young adults with down syndrome as well as those from poor backgrounds.

Mordi said that most young adults with down syndrome have been trained, groomed and educated and as a result could fit into the workforce space.

According to her, due to early medical intervention those with one underlying health condition or the other had been properly treated. 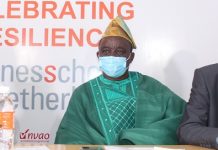