Despite being blessed with about 8,000 spices, Nigeria reportedly has less than 10 percent of these effectively harnessed for drug development and production.  This is mainly because the country had few professional herbal practitioners who could turn natural medicinal plants into ready-to-use medicines for various ailments. However, this is beginning to change with recent innovations brought by advancements in technology and research findings.

Even though the country still has to contend with myriads of roadside herbalists who lack requisite qualifications, some professional health practitioners have taken the bold step to acquire what it takes to advance the practice of complementary and alternative medicine to the level of competing with orthodox medicine. One of such pacesetters is Pharm.  (Hajiya) Zainab Ujudud Shariff, the pioneer head of department, Traditional, Complementary and Alternative Medicine, (TCAM), Federal Ministry of Health (FMoH), Nigeria.

At a time when many healthcare practitioners disdained traditional medicine for its weakness in posology, her uncontrollable passion for herbs made her dive deep into the practice decades ago.  So strong is her commitment that she would stop at nothing until she has unraveled the name and usefulness of each medicinal plant to mankind. This contributed to her being positioned in the heart of the health sector, coordinating alternative medicine practice.

Knowing that over 70 percent of Nigerians in the rural areas rely on medicinal plants for their well-being, Shariff chose not to just settle down in the comfort of her office at the Federal Ministry of Health. Rather, she embarked on learning trips to advanced nations with a wealth of traditional medicines experiences, such as India, China, and Japan, to obtain more knowledge on how to transform Nigeria’s rich medicinal plants into ready-to-use drugs. Little wonder she was also appointed pioneer managing director of the Nigerian Medicinal Plants Development Company (NMPDC).

An ardent herbal doctor, who originally inherited the proficiency from her grandmother, she has got the practice flowing in her veins, as she has thoroughly documented in three pharmacopeias, the A to Z of alternative practice. They are inestimable books on how a layman can easily harness the natural plants or herbs in his garden or kitchen to remedy any health condition he may be battling. The books also serve as empowerment tools in the hands of youth and women, a lot of whom have benefited immensely in becoming financially empowered through the cultivation of plants and herbs for sale.

Shariff had initially wanted to study Chemistry so she could become a teacher, but thanks to the then Registrar of ABU, Zaria, who encouraged her to study Pharmacy; and on hearing that the course was about drugs, she jumped at it.

“I asked what Pharmacy was because it was the first time I heard the word, and he said drugs, and I accepted immediately. I don’t regret studying Pharmacy. I liked the course, not knowing that I had an inheritance from my grandmother, who was into medicinal plants, which she used to manage people, especially those that had fertility issues, and children,” she narrated.

Beyond studying Pharmacy, Shariff has attended other international courses and obtained certificates in Chinese Traditional Medicine and Indian Ayurveda Medicine.

Although she did not specialize in Pharmacognosy, her innate skills catapulted her into the heart of alternative medicine. According to her, “I dream plants, I see plants and talk plants. I can formulate plants in the way they do artwork, I can combine plants for a particular ailment in line with the saying: Let food be thy medicine and medicine be thy food. I can formulate these plants to produce products that are supportive therapy, either for diabetics or hypertension because it is in me and what I call natural immunity.”

Milestone achievements at FMoH and NMPDC

A unique director at the FMoH, Shariff’s exploits at the institution will not be forgotten in a hurry. She skilfully nurtured a small division into a department, which produced a national blueprint on traditional medicine, called pharmacopeia. As a referenced document, it is a great resource material for the commercialization of medicinal plants, which has financially empowered thousands of jobless Nigerians.

As a resource lecturer on TCAM, who has represented the country in the practice at both national and international levels, Shariff launched a series of books on TCAM in 2021, an occasion which was graciously attended by the high and mighty at the FMoH, including the Minister of Health. The books include “Common Medical Plants in Nigeria”, “Medicinal Plants First Aid Kit (The Kitchen Spice Rack)” and “Healing Recipes and Herbal Therapy for Common Ailments”. Aside from books, she was the presenter of a popular television program called Nature’s Pharmacy on the largest African television network known as the Nigerian Television Authority (NTA).

The natural-born herbal doctor continues to blaze the trail in traditional medicine practice, as she recently got the support of the Nigerian First Lady, Dr (Mrs) Aisha Buhari, to organize the first TCAM Conference with the Federal Ministry of Health and TCAM department. The event was held at the Abuja International Conference Centre, in April 2022.

The passionate pharmacist turned herbalist did not limit her exploits to the FMoH; she took her natural medicine practice into organized pharmacy activities, especially during her tenure as the national chairman of the Association of Lady Pharmacists (ALPs). She successfully secured the support of the then-late First Lady, Hajia Mariam Babangida, to set up “Project 91”, designed to train Nigerian women in the entrepreneurial cultivation of medicinal plants. She and her team members succeeded in effectively engaging women from Kaduna, Niger, Delta, Edo, and Lagos states in the profitable cultivation of plants such as ginger, chili pepper, moringa, garlic, etc. This is a laudable project the current national leadership of ALPs is still running.

Her leadership also rallied support for the building of a rehabilitation center in Minna, Niger State, for drug addicts. It was another brilliant idea from her administration, which the association has stuck to date, in reaching out to rehab patients with drugs and food items.

According to Shariff, “What people don’t also understand is that medicinal plants are also an area we can call a part of the diversification of agriculture because we also cultivate those plants and this area through value chain can generate job creation, pharmaceutical excipients, wealth creation, and environmental improvement can be improved upon.”

Being an incurable medicinal plant practitioner, who has shown thousands of women the path to progress through the practice, Shariff urges all women to tap into the deep riches of herbal medicine in promoting healthy living in their homes. The diligent pharmacist, with zero tolerance for frivolities, admonishes lady pharmacists and other women to always support their own and collaborate for significant progress to be seen.

She summed up her advice to women thus: “Women have key roles in promoting healthy living in our societies. When you look back to our parents, they eat very healthy foods, mostly green leaves, and this cut across all the regions in the country; but women these days are cooking all manner of junk foods at home, using plenty of seasoning and applying it wrongly. We need to support our husbands and children with natural foods so that they can be healthy to keep the home.

“Woman, please be steadfast in all your dealings; be determined and work hard and with God, on your side, you will make it. Embrace sincerity and do not blackmail others to achieve your goals. Follow your path, learn from those who had been on that path and God will bless you.” 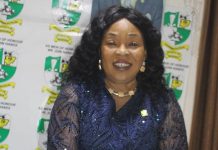