In appreciation for its continual support over the years, especially during its annual conferences, the national executives of the Association of Community Pharmacists of Nigeria (ACPN), led by the National Chairman, Pharm. (Dr) Albert Kelong Alkali paid a courtesy visit to Pharmanews corporate office in Lagos, on Tuesday 14, February 2017.

Pharm. Alkali, who noted that the visit was his first since his assumption of office as the national chairman,  was to appreciate the long-standing relationship and support of Pharmanews to the association, as well as to pay homage and seek advice from Pharm. (Sir) Atueyi, whom he described as a role model to the younger ones in the profession. 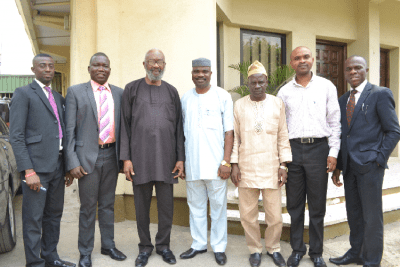