Dr Martinez began her career as a hospital pharmacist. She then went on to lead the Pharmaceutical Affairs Branch in the Division of AIDS (DAIDS) of the US National Institute of Allergy and Infectious Diseases until 2015. In this role she conceived and implemented a clinical trial model which incorporated DAIDS pharmacists in the design of clinical trials and clinical site pharmacists in the conduct of research studies. She successfully brought this model to fruition initially in the US and subsequently in Africa, Asia and Latin America. This approach led to a strong involvement of pharmacists in HIV/AIDS clinical trials.

On winning the award, Dr Martinez said: “I am deeply honoured and humbled to receive the André Bédat Award. This represents the culmination of a long career in research pharmacy. I share this award with my colleagues in all the programmes around the world in which I have been privileged to participate.”

About FIP: The International Pharmaceutical Federation (FIP) is the global federation of national associations of pharmacists and pharmaceutical scientists, and is in official relations with the World Health Organization. Through its 137 member organisations, it represents over three million practitioners and scientists around the world. www.fip.org

FIP believes it is of utmost importance to support and recognise individuals who, through their vision and commitment to their profession, are making outstanding contributions to pharmacy practice and pharmaceutical sciences, serving as examples for others. Each year it honours those who have demonstrated commendable work and dedication in areas which parallel its overall mission of advancing pharmacy practice, science and education for the betterment of global health. 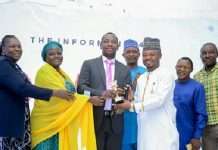