Although not popularly consumed in many parts of the world, a new study has found that high intake of whole grains can lower the risk of coronary heart disease and other related conditions.

The research, which was published in the American Journal of Clinical Nutrition, is one of the latest findings in the February edition of the publication. It was conducted to investigate the association between whole-grain intake in terms of total intake and intakes of different cereals and myocardial infarction.

According to the lead author, Anne Helnaes, from the Danish Cancer Society Research Centre, Copenhagen, Denmark, a total number of 54,871 Danish adults aged 50–64, were sampled for the study, with different research instruments.

Helnaes explained the reason for embarking on the study, which was to reduce the prevalence of coronary heart disease (CHD) around the world, which he described as the leading cause of death worldwide and accounted for an estimated 7.2 million global deaths in 2008 alone.

“By 2020, CHD is expected to be the leading cause of disease burden worldwide. It has been well established that diet plays a major role in CHD risk, and attempts should be made to promote a healthy diet to reduce risk of CHD. 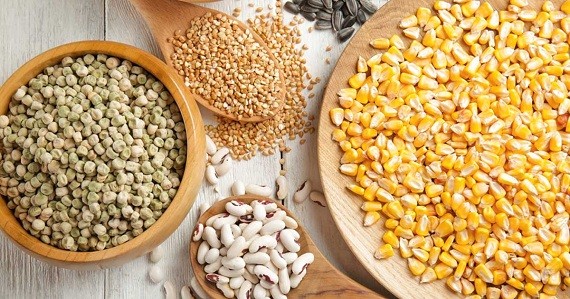 Previous studies had reported that whole grain intake has a protective effect against coronary heart disease. A meta-analysis suggested that an increment of three servings daily of whole grains could reduce the risk of colorectal cancer. Furthermore, whole grain intake had an inverse association with type 2 diabetes risk.

Though there are several whole grains foods – oats, barley, buckwheat, rye, brown rice, wheat, and others – the study under consideration only focuses on rye, oats, and wheat. Thus, we shall be considering the nutritional contents of these three and how they enhance human health.

Rye contains high amounts of lignans and is the richest source of dietary fibre in all cereals. Together with several bioactive components, such as plant phenols and lignans, manganese , phosphorus, copper, pantothenic acid, and magnesium, the fibre complex is believed to be largely responsible for the health benefits of rye .

Oats are a whole grain cereal, known scientifically as Avena sativa. They are mainly grown in North America and Europe. Oats contain the most lipids and hold a high content of the viscous fibre b-glucans and specific antioxidants.Whole oats are the only source of a unique group of antioxidants called avenanthramides, believed to have protective effects against heart disease.

Due to their beneficial health effects, such as lowering blood sugar and cholesterol levels, oats have gained considerable interest as a health food.

Wheat differs from oats and rye in that it has a higher content of insoluble fiber, but its starch content is similar to that of rye. Wheat is rich in catalytic elements, mineral salts, calcium, magnesium, potassium, sulfur, chlorine, arsenic, silicon, manganese, zinc, iodide, copper, vitamin B, and vitamin E.

Other benefits of whole grains according to studies are as follows:

Evidence is emerging that whole grain consumption may lower the risks of certain cancers, such as colorectal, breast and pancreatic cancer. Although the evidence is mixed at this point, what will definitely lower your risk of cancer, says Delbridge, is eating a diet that includes not only whole grains but lots of fruits and vegetables and not a lot of meat or processed foods.

In a study of almost 35,000 male health professionals aged 40 to 75, participants who consumed the highest amounts of whole grain were 23 percent less likely to get gum disease than those who stayed away from whole grains. This was true even after taking into account other factors like smoking, age and body size. Since gum disease is linked to inflammation and other health conditions like heart disease, this is about more than just a pretty smile.

Not only will whole grains help you live better, they may also help you live longer. One study of more than 40,000 postmenopausal women found that women who consumed four to seven servings a week of whole grains had a 31 per cent lower risk of dying from causes other than cancer or heart disease when compared with women who had few or no whole grains in their diet. And it worked in men, too, with another study finding that men who consumed one or more servings a day of whole-grain cereal had a 17 per cent reduced risk of dying than those who never or hardly ever ate it.

Carbs can be good for you. The trick is to find the right kind of carb and resistant starch is one. It’s a carb that acts more like a fibre. Because it’s not easily digested, it moves slowly through your digestive system burning more fat, stoking the hormones that make you feel full, maintaining your insulin in good working order and keeping blood sugar and cholesterol levels down. Try for 10 to 15 grams daily. Oatmeal and brown rice are good whole grain sources of resistant starch, which is also found in green bananas and other non-grain foods.

Eating whole grains early in life may ward off asthma and other allergic conditions. One study found that children who were introduced to oats as infants were less likely to have asthma or allergic rhinitis by the time they turned five. A Dutch study reported similar findings among children aged 8 to 13. An overall healthy diet with more whole grains, fruits and vegetables and less meat, and refined foods may reduce asthmatic wheezing, says Delbridge.

One way whole grains may help you control your weight is by making you feel fuller than refined grains such as cookies or white bread. “Whole grains take longer to digest and have a more satiating effect,” says Gans, who is also author of The Small Change Diet. This could also help keep your portions under control. Try rye or protein-packed quinoa to get maximum fullness.

One of the main benefits of whole grains is that, compared to refined grains, they help keep your blood glucose from spiking, which can reduce your risk of type 2 diabetes, among other things. Women in one study who ate two to three servings of whole grains a day had a 30 per cent lower risk of diabetes than women who ate little or no whole grain products. One analysis found a 32 percent lower risk of diabetes in people who ate three or more servings a day of whole grains versus a 5 percent risk reduction in those who ate refined grains. Something as simple as swapping one third of a serving of cooked white rice a day (about two ounces) for brown rice was associated with a 16 percent decline in type 2 diabetes risk.