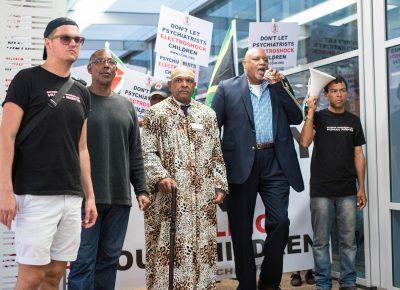 King Thomas Edgar Brown, Monarch of the National Khoisan Kingdom in South Africa supported a children’s rights march held Saturday outside the Cape Town International Convention Center (CTICC) where the World Psychiatric Association (WPA) International Congress was being held. The march, organized by the Citizens Commission on Human Rights (CCHR) (www.CCHRint.org), a mental health watchdog group, protested increasing psychiatric labeling and drugging of South Africa’s children. The rate of children being prescribed stimulants, which experts say are more potent than cocaine, is astoundingly greater than that even in the United States.

The King issued a heartfelt message, “We need to stop the senseless maiming of people, including children, by psychiatry. CCHR will take the lead and I will direct my people to be alert to this.”

Rev. Fred Shaw, Jr., a former Los Angeles Sheriff and past president of the Compton, California branch of the NAACP (U.S. National Association for the Advancement of Colored People) applauded King Brown’s concern. As an international spokesperson for CCHR, Rev. Shaw flew to Cape Town to warn South Africans about Western psychiatric trends, labeling children with “Attention Deficit Hyperactivity Disorder” (ADHD) and prescribing stimulants like Ritalin or antidepressants for “depression.” Despite a 2005 “Drug Alert” from South Africa’s Medicines Control Council about SSRI antidepressants putting adolescents at increased risk of suicide, children and adolescents are still prescribed the drugs.

Rev. Shaw, who helped CCHR present written testimony in 1997 to the Truth and Reconciliation Commission Hearing about psychiatry’s role in apartheid, warned then of the risks of South Africa adopting psychotropic (mind-altering drugs) in the post-apartheid era. He said, “Few parents are aware that psychiatrists admit they do not have any medical test to confirm ADHD or any mental disorder, nor do they have any cures. However, the drugs they prescribe have been linked to suicide, violence, heart conditions, high blood pressure, loss of appetite, and psychosis (http://APO.af/Ps4JIF).”

A psychiatrist, Anchy Asher Ivanis from Switzerland, who was attending the WPA Congress admitted to the marchers that he’d “never” cured any of his patients. Protestors included traditional healers, concerned doctors, nurses, teachers, parents and more than 60 children.

The Children’s Rights march culminated in the opening of CCHR’s world acclaimed free Traveling Exhibit: Psychiatry: An Industry of Death at the Castle of Good Hope. The exhibit includes a section on psychiatry’s role in apartheid as well as a contemporary section on psychotropic drugs and children’s rights.

King Thomas Edgar Brown addressed the opening, telling South Africans, “Come and see for yourself the devastating facts that CCHR has.”

Rev. Shaw added, “Parents should be alert to students abusing prescription drugs like Ritalin, which children snort and swallow to get high. Ritalin is known as ‘smarties,’ ‘rit’ or ‘kiddie cocaine.’”

He also warned about South African psychiatrists prescribing antipsychotics such as Risperdal (risperidone). There are about 13,000 lawsuits currently against its manufacturer in the U.S. over the drug causing gynecomastia (female breast growth) in boys prescribed it. The pharmaceutical company has paid out over $2.2 billion (Rand 31.5 billion) to settle criminal and civil charges of illegal marketing of Risperdal (http://APO.af/YYtQ0u). In July 2016, a massive $70 million (Rand 1 billion) was also awarded a Tennessee, U.S. teenager who blamed Risperdal for causing him to grow female breasts (http://APO.af/PgIpfw).

The WPA Congress is financially supported, in part, by Risperdal’s manufacturer and other psychotropic drug companies