Breaking the news at a press conference on October 13, 2014, Prof. Onyebuchi Chukwu, minister of health congratulated May & Baker along with two other pharmaceutical firms for making the country proud.

The award of the Certificate coincided with the company’s celebration of 70 years of doing business in Nigeria, the first pharmaceutical company so established in the country.

The WHO is the arm of the United Nations that regulates healthcare practice worldwide on the application of international best practice. Its Certificate of Good Manufacturing Practice (GMP) is issued to companies that meet its standards and apply to it for certification. The WHO GMP Certificate will enable the company to offer its products for the pre-qualification process of the WHO and subsequently position for the sales of her products to every market in the world.

It opens the door for foreign countries, donors and agencies to procure the company’s drugs for various health intervention programmes worldwide.

While WHO prequalification certification of Medicines Programme ensures that selected drugs supplied by the aforementioned agencies meet international standards of quality, safety and efficacy, the World Health Organisation and the Global Fund, on their part, spends close to N20 billion each year to purchase medicines for malaria, TB and AIDS intervention programmes in Nigeria from countries like Pakistan, India and Brazil because no pharmaceutical industry in Nigeria is pre-qualified.

Hitherto, the country’s pharmaceutical companies were not in a position to partake in international tenders for drugs against the three pandemics that require WHO prequalification. Health experts identify this as a major challenge on the local supply of medicines, especially anti-malarial, anti-retroviral (ARVs) and anti-tuberculosis agents.

That notwithstanding, the good news is that top Nigerian pharma giants such as May and Baker and others have now joined other global firms in producing medicines that conform with WHO-current Good Manufacturing Practice (WHO-cGMP) standards, a condition for WHO pre-qualification.

Chairman of May & Baker, Lt-Gen. Theophilus Danjuma (rtd) disclosed that following the policy of future based investments projected by the management, the company saw the need for global best practice and competitiveness.

“That was why we embarked on a long term project to seek international accreditation for the manufacturing processes of the company. The first step was to build a factory that would meet the standards of the World Health Organisation (WHO) in Good Manufacturing Practice (GMP) and other ramifications.

“That factory was completed and commissioned in 2011. Now, we are on the verge of obtaining WHO GMP certification for this facility and Prequalification for our products,” he said.

Danjuma strongly believed that above all, May & Baker’s quest for global best practice would further open a floodgate of interests in the Nigerian pharmaceutical manufacturing industry.

The chairman also commended the efforts of government through the Federal Ministry of Health and the National Agency for Food and Drugs Administration and Control, (NAFDAC), which he declared as assisting growth in the pharmaceutical industry.

This hope was fulfilled less than two weeks later.

His optimism was equally shared by the managing director, Pharm. Nnamdi Okafor who said the company has transformed into a global player through the years.

“I can confirm to you that the company has, in the past eight years, been rejuvenated, renewing itself with huge investments in two world class factories, research & development, human capital development and technology / process optimisation,” he said.

He summed it up by reiterating that with the aforementioned initiatives, May & Baker Nigeria is good to go!

In Africa, only South Africa, Morocco, Uganda and Nigeria have WHO GMP certified companies.

It would be recalled that May & Baker Nigeria Plc commemorated her 70th anniversary at Muson Centre, Onikan, Lagos on September 11, 2014 with several pharmacists, government functionaries and relevant stakeholders in the health sector in attendance.

As part of the 70th anniversary celebrations, the pharmaceutical giant donated sickbays to three primary schools in a national project of corporate social responsibility.

According to the company’s managing director, “It is our hope that these facilities will assist the management of the schools and those around them to provide emergency and primary healthcare to the young ones while in school.”

Each sick bay is fully air conditioned and equipped to the standard of a clinic with beds, medical instruments, drugs, recovery motifs and television sets to enable the children feel less of their pains while receiving attention.

On September 9, senior officials of May & Baker also made a visit to four charity homes in Lagos and Ogun States with products and other gifts for the inmates.

The company was founded on September 4, 1944 as Nigeria’s first pharmaceutical company and began local manufacturing of pharmaceuticals in 1976. In 2002 the company became 100 per cent owned by Nigerians with the complete buyout of the foreign partners who had decided to divest. 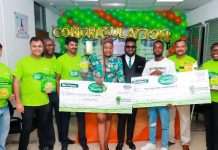 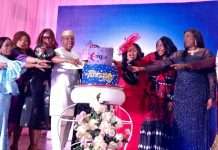 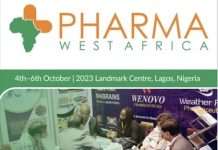