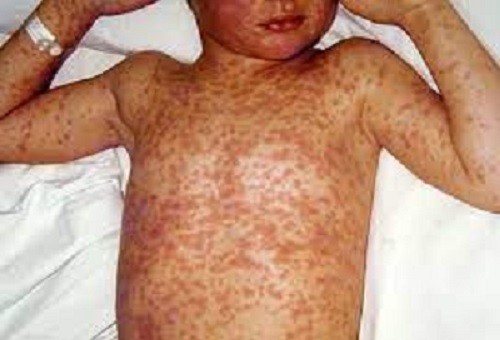 One of the most contagious diseases in human history, measles is an ancient disease that had been described by Persian physician and scholar Abu Bakr Muhammad Zakariyya Razi (also known by the Europeanised name Rhazes), as early as the 9th century. Measles became more internationally pronounced, as global exploration activities increased in the 16th century.

A Scottish doctor named Francis Home discovered, in 1757, that the disease was caused by a pathogen, a virus in the paramyxovirus family and it is normally passed through direct contact and through the air. The virus infects the respiratory tract and then spreads throughout the body.

Measles is a human disease and is not known to occur in animals. Transmitting the disease to healthy persons through the blood of infected patients, Home demonstrated that measles was indeed caused by an infectious agent. Places, where the disease had not been previously reported, were particularly vulnerable. Such places as the Faroe Islands (1846), Hawaii (1848), Fiji (1875) and Rotuma (1911), experienced devastating effects of outbreaks.

Prior to the availability of vaccines, measles had been endemic around the globe and remains a global epidemic, even though advances in the health systems of international communities, had seen mortality rates drop by the 20th century.

Measles remains one of the major causes of death among young children, despite the fact that a safe and affordable vaccine is available. The year 2015 witnessed 134,200 measles deaths globally – about 367 deaths every day or 15 deaths every hour. Vaccinations against the disease resulted in a 79 per cent drop in global deaths between 2000 and 2015.

In 2015, about 85 per cent of the world’s children received one dose of the measles vaccine by their first birthday through routine health services – up from 73 per cent in 2000. Measles vaccination prevented an estimated 20.3 million deaths from 2000-2015, making it one of the best buys in public health.

Mass vaccinations against the disease were first introduced at the national level in the 1960s, with the first internationally focused immunisation taking place in Africa in 1966. The World Health Organisation (WHO) worked alongside the governments of over 20 newly independent and decolonised countries in western and central Africa as well as the United States Agency for International Development (USAID) and Centres for Disease Control (CDC) in the area of vaccine administration with the twin goal of combating measles and eradicating smallpox.

In 1974, when the WHO established the Expanded Programme on Immunisation (EPI), now, the Essential Programme on Immunisation, measles was among the first diseases it targeted, while seeking to develop and expand immunization programmes all over the world. The rampant momentum of childhood vaccinations has led to a drastic reduction in the rates of the disease.

The WHO currently recommends immunisation at nine months for babies in areas where the disease is prevalent, while others are advised to have theirs at 12 to 15 months. Children are also to take a second dose needed to protect the almost 15 per cent of them who do not develop protective immunity after their first dose.

Being the most populous black nation on the planet, Nigeria has also had a very eventful history of measles occurrence, as well as prevention and control. As of January 2022, 254 cases of measles were confirmed in Nigeria. In 2020, 9000 cases were recorded in the country. In 2021, Nigeria, Somalia, Yemen, Afghanistan and Ethiopia recorded the largest measles outbreaks, largely due to insufficient measles vaccine coverage during those outbreaks.

There is no specific medication that kills the measles virus, once someone develops measles. Most patients get better by themselves. Some of the advice given by medical experts is that patients should rest, drink plenty of fluids and take acetaminophen (Tylenol) to help reduce the fever. For severely sick patients who develop pneumonia, middle ear infection or diarrhoea should discuss treatment with their doctor.

Even though it is a known fact that no medication can make the measles virus go away, it is also important to note that other medicines such as antibiotics may play significant roles in treating other symptoms that may arise as a result of the disease. Measles can be prevented with a measles-containing vaccine, which is primarily administered as the combination measles-mumps-rubella (MMR) vaccine.