Mega LifeSciences Nigeria Limited, a research based pharmaceutical multinational, has launched prostacare into the Nigerian market for the treatment of benign prostatic hyperplasia (BPH) symptoms in men.

Unveiling the drug at the Lagos office of the company on 8 October, 2014, the Product Manager, Pharm. Ifeanyi Offor emphasised the importance of Prostacare to every man, noting that one in every four normal Nigerian men from the age of 40 has the likelihood of developing BPH.

Quoting a report released by WHO in 2012, which placed the average life expectancy of Nigerian men at 53, Offor said more Nigerian men would be living with BPH symptoms.

He further explained that though BPH is not always a life threatening condition, it has tremendous negative impact on the quality of life of the patient.

Offor further noted that while some individuals consider the cost of treating BPH as prohibitive, the desease, if not detected and treated in good time, could lead to other complications such as severe urinary tract infections; bladder disease and obstruction of urinary tubules; and sexual dysfunction or acute urinary retention.

“Early detection is key to successful treatment”, he stressed.

Explaining the uniqueness of the newly launched product, the product manager said Prostacare is the only officially registered Saw palmetto brand with NAFDAC approval in Nigeria, and it contains lipophylic extract of Saw palmetto 320mg per capsule.

He noted that Saw palmetto is the most popular, effective and safe phytomedicinal agent used in the treatment of BPH since the late 19th Century.

On the usage of Prostacare, Offor said the drug “inhibits the action of a male hormone called dihydroxytestosterone (DHT) in the prostate tissue. Scientists believe that the action of DHT in the prostrate is responsible for prostate enlargement. Some conventional BPH drugs like Finasteride and Dutasteride also work this way. Also, Prostacare has been reported to relax the muscles of the prostate and bladder, helping to ease the flow of urine. For effective treatment, one capsule should be taken daily after meal with sufficient water, as relief in symptoms is seen after two weeks of continuous use,”

On the safety of Prostacare, Offor said, “Prostacare is quite safe and highly tolerable. Prostacare does not have the significant side-effect of erectile dysfunction, delayed ejaculation or anorgasmia and cardiovascular side effects found in the conventional BPH drugs. Rarely, mild stomach disturbances like nausea can occur. No serious drug-drug interactions have been reported with Prostacare”, he assured.

He however advised patients to confirm from their pharmacist whenever in doubt of any medication.

While admitting the possibilities of patients confusing the disease for other infections, Offor advised community pharmacists, who are often the first port of call in the community for most health complaints, to be careful in handling such cases and make appropriate referrals since early detection is very crucial in the management.

“In severe lower urinary tract symptoms with much enlarged prostate volume, surgical intervention is recommended. The commonest surgical procedure is Transurethral Resection of the Prostate (TURP), where a surgical instrument is used to remove part of the prostate tissues. Studies have shown that 5 to 10 per cent of the patients undergoing TURP have erectile dysfunction and about 10 per cent of the men will have the procedure repeated after five years”, he said.

Also speaking with Pharmanews in an exclusive chat on BPH, Dr Rufus Ojewole, a consultant urologist at the Lagos University Teaching Hospital (LUTH), stated that the most important factor in the development of BPH is age.

Ojewole, who said there was no specific data on the exact burden of prostate enlargement in Nigeria due to the paucity of community-based studies on clinical entity, however rated the prevalence of the condition very high in the country, according to hospital based studies.

On the symptoms of prostate enlargement, the urologist said this could manifest in two ways: asymptomatic and symptomatic. He defined asymptomatic BPH as an enlarged prostate without clinical manifestation or symptom, which could be called histological BPH. Digital Rectal Examination (DRE) and Ultrasound (US) imaging of the prostate gland usually detect this. It therefore means that someone may have an enlarged prostate and yet, no symptoms.

He added, on the other hand, that “when symptomatic, benign prostatic enlargement commonly manifests with various difficulties in passing urine, which nowadays is termed Lower Urinary Tract Symptoms (LUTS). LUTS is sub-divided into irritative (storage), obstructive (voiding) and post-void symptoms.

“These symptoms may progressively worsen over time and culminate in episodes of acute or chronic urinary retentions, which are painful and painless inability to pass urine respectively. Other symptoms are haematuria, weak erection and symptoms suggestive of urinary tract infections like fever and supra-pubic pain”, he elucidated.

Ojewole also stated that some symptoms may occur due to complications of the disease, usually from lack of treatment or delayed/inadequate treatment. He listed these to include: facial puffiness; leg swelling; hiccups and vomiting, as seen in patients who develop renal failure from the obstruction caused by the prostatic enlargement. Others are loin pain, hernias and painful swollen testicles from infection (Epididymo-orchitis).

The urologist however emphasised that benign prostatic enlargement does not lead to prostate cancer, noting that prostate cancer may co-exist with BPH. Thus, he recommends thorough evaluation of enlarged prostates by urologists, who will utilise various tools, including Prostate Specific Antigen (PSA), DRE and Transrectal Ultrasound (TRUS), to arrive at accurate diagnosis.

He added, on a gloomy note, that as long as aging is inevitable, prostate enlargement is not preventable because it comes along with age advancement in men.

He therefore urged men to visit their caregivers, preferably urologists, for prostate check, noting that this will afford them the opportunity of early treatment of BPH and, more importantly, allow early detection with potential cure.

“As a matter of fact, all men should see a urologist annually from the age of 50years for prostate check whether symptomatic or not,” he counselled. 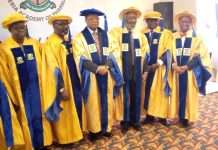