As community pharmacists in the country look forward to the next national conference of the Association of Community Pharmacists of Nigeria (ACPN), holding in Akure, Ondo State, next year, National Chairman of the association, Pharm. (Alh) Olufemi Ismail Adebayo, has assured members of a more improved conference. Speaking in an exclusive interview with Pharmanews in his office, the pragmatic leader also revealed some of the achievements, as well as challenges of his administration, as he prepares to hand over to the next leadership at the forthcoming conference. Excerpts:

Tell us some of your achievements and challenges since you became the national chairman of ACPN.

Regarding our achievements, we have been able to bring ACPN into limelight through our various activities.We are now more visible, as we have been able to advertise the pharmacy emblem which is our symbol as community pharmacists to the people through various journals, educating them on the need to purchase their drugs from only registered pharmacists.And I am happy that the campaign is yielding good fruits as people are now enlightened and informed.

Secondly, we have been able to create a database for the association.It is already established and we have successfully signed a Memorandum of Understanding (MoU) with Globacom at the last national conference in Ilorin, Kwara State.

We have also been able to work cordially with our parent body, the Pharmaceutical Society of Nigeria (PSN). Presently,our parent body is an active member of JOHESU, which is a body for all healthcare professionals in the country. We are also on the lookout for a more befitting national secretariat for the association and, hopefully, something will happen soon.

The major challenge that I faced when I assumed office was the issue of finance, because funding an association that is non-governmental like this is always a challenge.But I want to appreciate my members for the trust they had and still have in me, especially when we increasedour capitation by hundred percent. The capitation had been the same for more than seven to eight years, since around 2006, without consideration for increase in the cost of living and even cost of travelling around and outside the country, which, as a national chairman, I cannot do without. So I appreciate them for bearing with us on the increment of our capitation and I am assuring them that I will not renege on my promise that the money will be judiciously used and that their welfare will be paramount in our hearts.

We also appreciate the efforts of the various companies that have always been there for us during our national conferences and major events – not only pharmaceutical but also telecom companies.If not for them, maybe we would have been running the association at a loss.

What positive changes should community pharmacists in the country expect at the next national conference in Akure?

We’ve always believed at the ACPN national office that every conference should come with a difference and, coincidentally, the next conference will be my last conference as the national chairman of ACPN.So we promise that there is going to be innovations, new ideas and better improvements on the last conference in Ilorin.

It has been our practice that, as soon we are through with a certain conference, we reappraise the event, and we try, as much as possible, to improve on it.So I promise my members that this is going to be a conference with a difference. And, being an election year, we want members to turn out enmasse to elect a good and pragmatic leader of their choice. Every vote counts; and we promise that the election will be free and fair.

We have taken note of the challengeswe had at the last conference, even though it was an improvement on the 2013 edition in Calabar. And we promise that we are still going to have more improvements.

What grey areas in the profession do you think stakeholders at the conference need to address?

Also, the National Drug Distribution Guidelines is one programme that, if well implemented, will solve the problem of fake and counterfeit drugs in the country. All pharmacists should support it and ensure it is well implemented so that it will benefit the professionals, as well as the general populace.

What is your general view of the current state of the healthcare sector?

We are happy that the society is now aware that there are other professionals, aside medical doctors, in the healthcare sector.I believe healthcare should involve team work, because everybody has his or her own role to play, and the focus should be the patient.Until this is done, we will still witness a lot of wrangling and unnecessary rivalry. 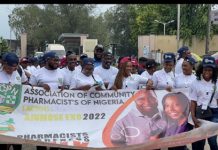 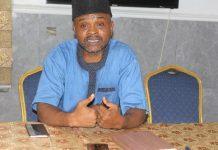