Rising from its 2021 Annual General Meeting (AGM)  which held at the indoor hall of the Pharmacy Villa, Ogudu, Lagos, the Association of Community Pharmacists of Nigeria (ACPN), Lagos State Chapter,  has frowned at the policy of the National Agency for Food and Drug Administration and Control (NAFDAC) which requires certain amount of  money before destroying expired drugs submitted by its members, saying it is double jeopardy for someone to lose money over expired products, and still pays  to have it destroyed.

Speaking during the AGM, the chairman, ACPN, Pharm. Lawrence Ekhator, noted that community pharmacists in the state are not happy with the fact that NAFDAC is demanding payment for the destruction of expired drugs, stressing that losses had already been incurred from such products.

Ekhator further noted that huge payments requested by the agency from members of the association for the destruction of drug products remain unsustainable, as it promotes the reluctance of law-abiding community pharmacists towards surrendering their expired products for destruction.

The ACPN boss who said the relationship with the agency remain cordial, however, called for improvement, as he urged the  agency to activate the recall system by the manufacturers and importers of the products with a view to mitigating the losses incurred by members upon expiry of the products.

He added, “The attitude of NAFDAC officials during enforcement activities is also a cause for concern. The military-style of enforcement should be played down, although we have informed the director-general about this and she promised to do something about it, there has been a recent upsurge in the style of enforcement. We, therefore, appeal to the agency and its leadership to reconsider this approach to enforcement with a view to maintaining the cordial relationship that exists between the ACPN and NAFDAC”, he said.

Also speaking on the issue, the Immediate Past Chairman, ACPN, Pharm. Olabanji Obideyi, described the situation as worrisome, saying pharmacists constantly incur a loss of funds invested in their businesses, despite being charged for registration of the same products by the regulators, adding that paying again for their destruction is unfortunate.

“In the first place, when a drug expires, it cannot be dispensed again, so whatever investment that one might have on it is lost already, but asking such person to pay money to have the drug destroyed is quite worrisome. Ordinarily, what should have been the situation is that drugs that are expired should be recalled back to the company where they are bought from to be destroyed, but today what we have is the opposite”.

READ
Physical symptoms of loneliness you need to know

He added, “I remember what we had when I was the chairman, we had an agreement for a reduction in the charges, and when we distributed the money among our members who were involved, it wasn’t really a cause for concern, but it’s a different ball game this time around considering what they are asking for and that is why the issue has been dragging for this long and up till now, there has not been headway”.

While speaking, the Chairman, Pharmaceutical Society of Nigeria (PSN), Lagos State Chapter, Pharm. Gbolagade Iyiola, stressed that the reason for the challenge was because the country does not have a good recall system, saying if there is, the manufacturing or marketing companies of the products are supposed to have a recall system whereby the products are recalled once they are expired and do the needful, in such a way that destruction would not be harmful to the people

“Imagine procuring about ten packs of products, two packs got expired in your hand, ordinarily you have lost money, yet you are still expected to pay a huge sum of money to have the expired product destroyed, can you imagine that? It’s a challenge of double jeopardy”, he said.

Speaking earlier on the issue of illegal drug outlets, the duo of Pharm. Deji Osinoiki, chairman, board of trustees, Lagos ACPN, and Pharm. Aminu Yinka Abdulsalam, urged the Pharmaceutical Inspectorate Committee (PIC), of the Pharmacists Council of Nigeria (PCN), to scale up their game in the area of ridding the environment of illegal outlets, adding that if nothing is done today on the area of illegal outlets, the young ones may not have a place to practice tomorrow.

According to Pharm. Osinoiki, the problem of Pharmacy are pharmacists themselves, adding that there are a lot of bad eggs among the practitioners who encourage and fuel the register-and-go syndrome and allow the influx of charlatans in the respected profession. “If we don’t have discipline among ourselves, we can’t keep blaming the PIC all the time. Let us enforce discipline and sit up as men of honour that we claim,” he advised.

The  high point of the programme was the re-election of the executive members of the association for the next one year. 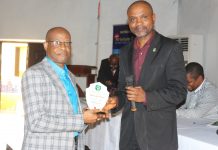