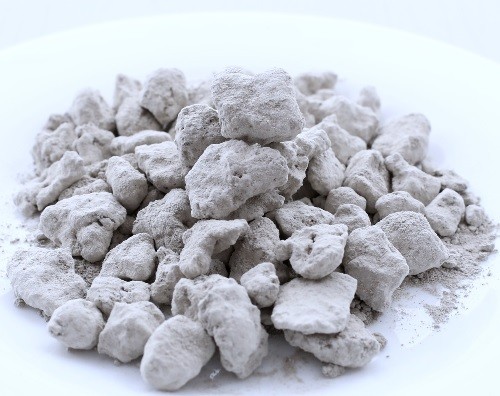 Potash is the general name given to various inorganic compounds that contain potassium in water-soluble form. The name derives from pot ash, which refers to plant ashes or wood ash soaked in water in a pot, the primary method of manufacturing the product before the industrial era. It is called kanwa in Hausa, akanwu in Igbo and kaun in Yoruba. Common names sometimes used synonymously are caustic potash or potash lye.

Constituents
Potash ores are typically rich in potassium chloride, sodium chloride and other salts and clays. It has a high sodium content and very little potassium.

Preparations
Potash is available in form of powder, granules and lumps. It is an ingredient of local delicacies like yam porridge, abacha, ugba and nkwobi. It is used in Nigeria as a tenderising agent in local dishes preparation.

Pharmacological actions and medicinal uses
Studies reveal that potash has expectorant and antacid properties, thus its use in traditional medicine concoctions to treat cough, constipation and flatulence. Some local villagers combine potash with other local ingredients to form utaba, which is a type of local snuff.

Studies have corroborated the ability of potash to increase production and quality of breast milk in new mothers and its use by Hausa women to prepare the special porridge meal which they often take after childbirth.

In orthodox medicine, potassium, which is found in potash, is used in the treatment of hypokalaemia. Potassium is one of the most important minerals in the body. It helps to regulate fluid balance, muscle contractions and nerve signals. A high-potassium diet may help reduce blood pressure and water retention and protect against stroke.

Potash is used for the relief of tooth ache and as a preservative, due to its antifungal properties. It is used as a fire extinguisher.
Potash is important for agriculture because it improves water retention, yield, nutrient value, taste, colour, texture and disease resistance of food crops. As a supplement in animal feeds, potash helps to promote healthy growth in animals, as well as increase milk production.

Adverse effects
Potash has been associated with loss of appetite, weakness, reduced activity level and weight loss in Wistar rats. High intake could lead to liver problems, as well as severe and irreparable damage to the kidneys. Potash reduces the protein value in diet. Excessive respiratory disease has been a concern for potash miners.
Studies reveal that potash can induce abortion in early pregnancies, due to its ability to increase uterine contractility. It is also said that excessive intake of potash by men predisposes them to low sperm production.

Economic uses and potentials
Potash has been used in bleaching textiles, making glass, ceramic and soap. It is useful in the pharmaceutical, food, beverages, cosmetics and glass industries.
Potash price is reported to have shot up from $650 to $800 per tonne, since the COVID-19 pandemic outbreak. There are speculations by analysts that prices could reach as high s $900 to $950 per tonne. Potash costs up to ₦4,500 per bag in the Nigerian market.
There are opportunities in the mining, production, processing, distribution and sale of potash, both locally and globally.