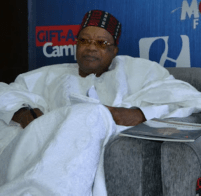 s Adelusi-Adeluyi, OFR, mni than to borrow the following expression of a renowned reformer: “Great people and champions are special gifts of God, whom He gives and preserves; they do their work, and achieve great actions, not with vain imaginations, or cold and sleepy cogitations, but by motion of God.”

Even the most cursory acquaintance with the contributions of Juli (as he is fondly called by his peers) to the Nigerian pharmaceutical industry and the health sector as a whole would reveal that he is indeed  a man driven by the motion of God and the mentality of greatness. And it is no coincidence that he is regarded as one of the most accomplished pharmacists and entrepreneurs of our time.

To begin with, Prince Juli was the first and remains the only pharmacist to have become minister of health in Nigeria. He was appointed Minister of Health and Social S ervices during the interim government of Dr Ernest Shonekan in 1993. He is also the chairman of Juli Plc (formerly Juli Pharmacy Limited), the first indigenously promoted company in Nigeria to be quoted on the Nigerian Stock Exchange (NSE).

Juli actually pioneered the idea of pharmaceutical chain stores in Nigeria with Juli Pharmacy Ltd, a company he established in 1972. The company is reputed for providing services in retail, wholesale and importation of pharmaceutical products. Due to his business ingenuity, he was able to grow the company rapidly, and by 1985, the enterprise already had 22 branches nationwide. His uncommon entrepreneurial acumen attracted the attention of the then Head of State, General Ibrahim Babangida, and was given a letter of commendation for leadership in indigenous enterprise, following the 1986 feat at the NSE.

Julie is a Fellow and pioneer president of the Nigeria Academy of Pharmacy (NAPharm), as well as the founding secretary-general of the West African Postgraduate College of Pharmacists (WAPCP). He served as secretary and president of the Pharmaceutical Society of Nigeria at different times. And as should be expected of an astute leader, his tenure was characterised by several innovations, one of which was the composition of the Pharmacy Anthem.

Like many super-achievers of his calibre, Juli’s rise to prominence did not happen overnight. Records have it that he had always demonstrated profound understanding and mastery of the art of leadership from his youth. He was an outstanding student and youth leader at the local, national and international levels. He served as vice president of the International Affairs of the National Union of Nigerian Students (NUNS) in 1964. He also served as the president of the Pharmaceutical Association of Nigeria Students (PANS).

At the international level, he was elected by student organisations worldwide, gathered at their Annual Conference at Christ church, New Zealand, as secretary general of the world student body, the International Students Conference (ISC) based in Leiden, Holland, in 1965. In this capacity he built student union organisations in Africa, Asia, Europe and the Americas. This took him to over 143 countries and, as the quick-thinking strategist  that he has always been,  he seized the opportunity to become multilingual. Presently, he speaks English, French, Dutch, Portuguese, Spanish, Igbo, Hausa and Yoruba.

Pushing the frontiers of excellence

Although a pharmacist by profession, the prince proved the vastness of his versatility when he ventured into the legal profession because of his love for justice and fairness. He emerged best graduating student of the Nigerian Law School class of 1987 and subsequently became a member of the Black Table of the Chambers of Chief F.R.A Williams. He has been in pro bono legal practice, providing free legal aid to prisoners and the underprivileged for many years.

Prince Juli has left prodigious legacies and has served in top positions in many sectors of the Nigerian society aside pharmacy and healthcare. He was the first District Governor of Rotary Club in Nigeria. He is also a past president, Nigerian-American Chamber of Commerce, past president, Alumni Association of the National Institute of Policy and Strategic Studies (AANIPSS), past chairman, National Council for Population and Environmental Activities, and past chairman, Odu’a Investment Limited.

Adelusi-Adeluyi was born into the royal family of Ado-Ekiti, Ekiti State, on 2 August, 1940. He had his elementary education at St. George’s Catholic Primary School, Ado Ekiti, from 1946 to 1952. He attended St Thomas Aquinas College, also in Akure (1953 – 1957) for his secondary education. From there, he got admission to the Nigerian College of Arts, Science and Technology, Ibadan (1959– 1961).

His venture into pharmacy began in 1962 when he was admitted to study pharmacy among the pioneering set of students into the University of Ife (now Obafemi Awolowo University, Ile Ife), from 1962 to 1965.

Prince Juli is a prolific writer and consummate reader. He has, to his credit, several publications in health and pharmacy, among which are Drug Control, Import and Storage (Continuing Education, Ife, 1976); You Are Welcome To My Profession, Pharmacy (television broadcast, 1979); Public Relations in Pharmacy (PSN, 1979); Medicines: Practical Problems Involved In Their Delivery to the Patients In Developing Countries (International Pharmaceutical Federation (FIP) Madrid, Spain; Pharmacy in the West Africa Region: Problems and Prospects (W.A.P.F 1986); and The Pharmacist and Private Sector in Essential Drugs Programme (PSN, Benin, 1986).

Prince Juli is a devout catholic. He is married to Juliana Omosalewa Adelusi-Adeluyi, his childhood heartthrob, and they are blessed with children and grandchildren.