A surgeon who has made exceptional contributions to the art and science of surgery, Prof. Oluyinka Olutoye has, without a doubt, distinguished himself in the medical field. Described by NBC News Dateline programme as a “miracle worker operating where few have ever gone before”, his uncommon operations give many children a chance at a healthy and normal life. 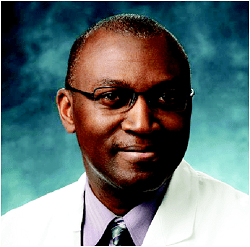 Developed in 1995 at the Children’s Hospital, University of Califonia, San Francisco, the procedure is an extension of a standard classical Caesarean section, where the foetus is partially removed from the mother’s womb to undergo surgery while it is still attached to the umbilical cord. This allows surgeons to repair an airway obstruction or other breathing problems before the baby is delivered and forced to breathe on its own. Prof. Olutoye and his team at the Texas Children’s Hospital have performed over eight of such surgeries.

In 2016, Prof Olutoye’s brilliance and gifted hands became a global phenomenon when he led a team of doctors in the surgery that saved a 23-week old foetus from a life-threatening tumour. The team brought the baby (Lynlee Hope) out of the womb at 23 weeks old and removed a large tumor (Sacrococcygeal Teratoma) growing on her tail bone, after which they returned the foetus to its mother’s womb to complete the full gestation period of nine months. This feat has generated a worldwide recognition of the baby that was born twice.

In February 2015, he was one out of three Nigerian medical doctors that successfully separated conjoined twins in a surgery that made the headlines in the American media and the world. The twins, Knatalye Hope and Adeline Faith Mata, were successfully separated on 17 and 18  February. He and his colleagues are still being celebrated for this feat.

The Nigerian government, while congratulating Prof. Olutoye and the people of Nigeria on the achievement, stated, through the Senior Special Assistant to the President on Foreign Affairs and Diaspora, Hon. Abike Dabiri-Erewa, that President Muhammadu Buhari received the news with excitement and fulfilment.

Prof. Olutoye, an alumni of Obafemi Awolowo University, Ile-Ife, has been bestowed with the winner of the 2008 Great Ife Alumni Award for Excellence in the Sciences category, in recognition of his outstanding achievements in the area of human foetal surgery, and exceptional contributions to his chosen career of Medicine. He has also,  by this recognition, been inducted into the Great Ife Alumni Hall of Distinction.

Prof. Olutoye was born in Lagos to the family of Major General (rtd) Olufemi Olutoye and Prof Omotayo Olutoye on January 15 1967. He has five siblings, two brothers and three sisters. It had been his childhood dream to become a medical doctor.

Prof. Olutoye’s quest for excellence began at an early age. As a son of a soldier and an academic mother, he was introduced to a life that placed emphasis on excellence during his formative years. He had his primary education at the Lagos University Staff School and his secondary education at King’s College Lagos.

After his medical education in Nigeria, he relocated to the United States for further educational opportunities. He started his postgraduate education in paediatrics at the Howard University General Hospital. He received his PhD in Anatomy from Virginia Commonwealth University in Richmond, Virginia, in 1996. He completed his residency in general surgery at the Medical College of Virginia Hospital, Virginia Commonwealth University, and had his fellowship in paediatric surgery at The Children’s Hospital of Philadelphia and the University Of Pennsylvania School of Medicine in Philadelphia, USA.

Prof. Olutoye is a beneficiary The James IV traveling fellowship of the Association for Academic Surgery. The prestigious association of surgeons was established in 1957 for surgeons from around the world to be brought together for exchange of ideas and methods as regards surgery. He was described by the association as someone “who has made outstanding contributions to the art and science of surgery.” Indeed,  his success and contribution to Texas Children’s Foetal Centre at the Texas Children’s Hospital Hospital has been phenomenal.

Prof. Olutoye is married to Prof. Olutoyin Olutoye. The couple have two children, a boy and a girl and they currently live in the United States.