Teeth grinding, or “bruxism,” is a common habit among children, particularly those under age 11. It’s so common, that many consider it a normal childhood habit that will sooner or later be outgrown. It is only when it causes severe tooth wear, pain, or sleeplessness that it may begin to arouse concern.

Even at that, healthcare professionals do not always agree on how or when to treat bruxism — if at all. And the causes are not completely understood, though psychological stress appears to play an important role.

The term bruxism comes from the Greek “brychein” from which is derived “ebryxa” – to gnash the teeth. It was first used in 1931 to describe involuntary, excessive grinding, clenching, or rubbing of the teeth together.

More recently, it has been further defined as a diurnal (during the day) or nocturnal (at night) parafunctional activity (“para” – outside, “function” – normal). It refers to movements of the teeth and jaws that are not necessary for functional activity — chewing, speaking or swallowing, for example.

Repetitive parafunctional forces can damage the teeth when they occur through these quite unconscious habits. Children are susceptible to various habits conducted without consciousness, such as nail and cheek biting and non-nutritive sucking. Parafunction when awake, which manifests as clenching and/or grinding of the teeth, often occurs without awareness, especially during stressful situations or intense concentration. When a child is made aware of it, the bruxism can be stopped or modified. On the other hand, a child cannot consciously stop bruxing while asleep.

Bruxism produces a screeching, gritting sound, as unnerving as scraping fingernails across a blackboard. The first time you hear it in your sleeping child’s bedroom you may wonder: What could possibly be going on in there? What a surprise to find that such a small person can make such a loud noise — and not even wake up.

In healthy infants, sleep bruxism typically starts at about one year of age, soon after the front teeth come into the mouth. In young children, teeth grinding may be due to the immaturity of the neuromuscular system (“neuro” – nerves; “muscular” – muscles) that controls chewing. 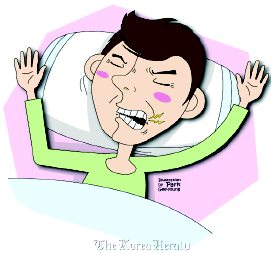 Current thinking is that bruxism is part of an arousal response, defined as a sudden change from deeper to lighter sleep or awakening. In young adults, more than 80 per cent of sleep bruxism episodes occur during periods of sleep known as stages 1 and 2 non-Rapid-Eye-Movement (REM) sleep, and only five per cent to ten per cent in REM (deep) stages. Many of these episodes lead to a shift in sleep stage, usually toward awakening or lighter sleep.

Bruxism is prevalent in children who snore and/or breathe through their mouths. One theory is that there is a correlation between sleep bruxism and upper airway obstruction, causing obstructive sleep apnea (“a” – without, “pnea” – breath), in which the tongue and tissues at the back of the mouth fall backwards and block the airway.

Sleep apnea can be dangerous. It can lead to episodes of awakening throughout the night to gasp for air, interrupting restful sleep and growth, and depriving the brain of adequate oxygen. It appears to happen more often in children who sleep on their backs. A link has also been made between teeth grinding and enlarged tonsils, which in turn is strongly correlated to upper airway obstruction. Removing the tonsils and adenoids has been shown to lessen teeth grinding in some children. Asthma and respiratory airway infections may also be factors in bruxism.

Some medications, such as the most commonly prescribed antidepressants, may contribute to grinding habits. The number of children taking this type of drug is growing, so this is an important factor to consider when treating children with bruxism. Hyperactivity is also associated with bruxism as are the amphetamines used for managing attention deficit hyperactivity disorder (ADHD).

In older teens, factors implicated in teeth grinding include smoking, alcohol, illicit drug use, as well as other medications, trauma and disease. In addition, a host of diseases among children have been linked to bruxism, such as cerebral palsy, Down syndrome, and epilepsy.

Prevention and treatment — or not

Because children generally outgrow bruxism, treatment is not usually recommended — unless the habit is causing troubling signs and/or symptoms, as well as excessive tooth wear. But it can be difficult to determine if dental wear indicates a current tooth-grinding habit, as bruxism varies over time.

Other symptoms associated with bruxism, such as headache, jaw pain or ear pain, can also be caused by things unrelated to teeth grinding. Another important consideration is whether the child’s diet is a factor. The rise of soft drink consumption in children has significantly contributed to the development of tooth wear by enamel erosion. Sodas (either with high sugar content or the diet variety), sports drinks, and fruit juices are very acidic and bathe the teeth in tooth-eroding acid, especially if consumed throughout the day. Saliva, nature’s way of neutralising acids, needs at least 30 minutes to stop this process.

If a paediatric dentist or general dentist traces your child’s dental problems to teeth grinding, he or she may recommend a thin, plastic nightguard to prevent parafunctional activity during sleep, though this remedy has not proven effective for baby teeth. Your paediatric or general dentist may also recommend that parents enlist the help of a specialist.

Children with upper airway obstruction should be referred to a doctor known as an ear, nose and throat (ENT) specialist. Kids with severe psychological problems should be referred for therapy. Parents of children or adolescents who are taking medications that may cause bruxism can discuss the condition with the child’s primary care provider including whether it’s possible to switch medications.

Until the origins of teeth grinding in children are more fully understood, treatment will continue to be based on anecdotal evidence. The important thing to remember is that the habit of teeth grinding is usually harmless, despite the unsettling sounds. Luckily, new teeth will be on the way.