Consistent monitoring and evaluation of the nutritional status of Nigerian children is important not only to assess the impact of various multidisciplinary interventions but also to identify other necessary efforts required to support and nourish the growing children to their maximum potentials. National Demographic and Health Survey, the sixth and the last of which was conducted in 2018 is one of the relevant sources of useful insights in this respect.

Stunting, a measure of chronic malnutrition which has been said to be a risk factor for diminished survival, childhood and adult health, learning capacity and productivity (Deway and Begum, 2011) has over the years been disturbingly high among Nigerian under five children at 42% (NDHS, 2003), 41% (NDHS, 2008), 37% (NDHS, 2013) and 37% (NDHS, 2018).  As dire as the consequences of stunting are, one out of every three Nigerian U-5 is stunted! 7% and 22% of Nigerian U-5 are wasted and underweight respectively. Sixty-eight percent (68%) of the children are anaemic (NDHS, 2018). 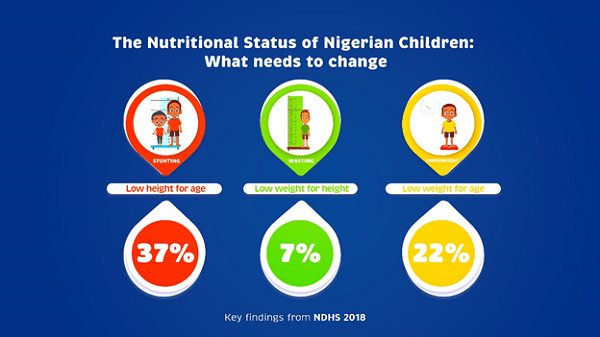 It is an established fact that the aetiology of child malnutrition is diverse, classified into immediate, underlying and basic causes as lucidly illustrated in the UNICEF’s conceptual framework of malnutrition (UNICEF, 2015). Inadequate dietary intake is among the immediate causes of malnutrition. The children are fed with predominantly plant-based foods lacking in one or more essential nutrients such as amino acids, vitamins and minerals, leading to macro and micronutrient malnutrition.

According to the World Health Organization (WHO) malnourished children, particularly those with severe acute malnutrition, have a higher risk of death from common childhood illness such as diarrhoea, pneumonia, and malaria. As a matter of fact, nutrition-related factors contribute to about 45% of deaths in children under-5 years of age (WHO, 2019). Besides, these anthropometric indicators have been well correlated with the cognitive development of a child (Laude et al, 1999; Sandjaja et al, 2013; Spencer et al, 2017). For instance, the likelihood of children with non-verbal IQ being below average  according to nutritional status were 3.5 times more likely among underweight children and 2 times more likely among thin and stunted children.

All stakeholders, governmental and non-governmental organizations alike must renew and increase their commitment to the optimal nutrition of the children. The importance of nutrition education and dietary counseling of parents and caregivers cannot be over-emphasized. These children need to be supported beyond survival. A balanced and adequate diet consistent with their rapid brain growth and development will enhance their school enrollment, academic performance and productivity.

Chief among the nutrients required to support children’s fast developing brain is DHA. DHA is an omega-3 fatty acids predominantly found in the membrane of the brain and is a major building block of the brain. DHA is found in breastmilk and food sources like fish, eggs and chicken. Breast milk is the best for babies and of course the gold standard for infant feeding.

The World Health Organization recommends that infants should be exclusively breastfed for the first six months of life after which appropriate complementary feeding should be commenced while breastfeeding is continued up unto at least two years.  Afterwards, it’s important that milk remains a vital part of a child’s diet till adolescence and beyond.

According to the Food and Agriculture Organization of the United Nations, milk and dairy products have been successfully used in the prevention and treatment of moderate and severe malnutrition in children. A well-balanced growing-up milk, tailored specifically to their nutritional requirements, can serve as a valuable addition to their daily diet  by providing substantial amounts of daily-required (essential) nutrients including DHA.

Peak 456 Growing Up Milk with DHA is specially formulated for children 4 to 6 years old to support their physical growth and  continuing brain development.

As stated by UNICEF in its website feature, Unlocking children’s potential, good nutrition is the bedrock of child survival, health and development. We must all do our best as policy makers, service providers or parents to address the worrisome nutritional status of Nigerian children.