For those people whose body systems are prone to periodic sicknesses, there is respite in sight, as a natural health therapist, Adeline N. Ojigho has revealed the secrets to healthy living through the consumption of natural foods and exercise.

Ojigho, who stressed the benefits of natural diet to the human body, said good health is 70 percent diet, and ”if you are able to win the diet battle, then you have won the battle for your health”.

Speaking with Pharmanewsonline in exclusive interview at the lunch of her book titled: “You don’t have to be sick”, the natural health therapist condemned the habit of most Nigerians in cultivating appetite for western diet, saying this is killing us rather than helping.

“Over the years, we have developed westernised taste and moved away from our local foods and this is causing us a lot. Most of the westernised foods are all processed, and when we load ourselves with processed foods we suffer for it”, she lamented.

On the secrets of staying healthy, she advised participants on the consumption of more fruits and vegetables, which are affordable, while disagreeing with the notion that healthy living is expensive.

Ojigho said: “It is sheer ignorance that makes people think eating healthy diet is expensive. As far as I am concerned, there are veggies that won’t tear your pocket if you eat them in season. In season they are cheap, because all year round we have a particular set of fruits in season, so eat them in season, you will be getting the right nutrient from them.

“When you look around in the markets, you will see the sweet potatoes, Irish potatoes, Cocoa yams, yam, and local rice. Many people don’t eat the local rice, they prefer the polish rice and the polish rice is not healthy for us. We have been blinded by the western culture, but anyone who dares to open his eyes will see things like garden eggs, tangerine in season, and others that are very affordable to the man on the street”.

READ
From Disappointment to His Appointment

Narrating her motivation for writing the book, Ojigho said she beliefs so much that ill health can be basically managed with natural things like food, supplement, water, exercise, because she has lived through it and she is a living testimony to what natural diet can do.

“My journey started when I discovered that I was actually suffering because of what I was eating and drinking. I had a lot of health issues, at a point, I will say the Lord brought my way a book I read and reading that book opened my eyes to the fact that I was the cause of my ill health and I went about changing the things about my life causing ill health.

“And within a space of six months, I recovered from every health challenge I was having. And I thought within myself that this is a topic that needs to be spoken about, and particularly putting it in a written form, and that was why I titled the book: ‘You don’t have to be sick”.  Actually it is ignorance that is causing so much of these diseases, thus, there are things you need to know”, Ojigho explained. 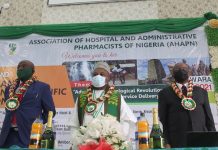