In a bid to reduce the worldwide burden of the disease called cancer, which not only has killed about thrice the number of people who have died of tuberculosis, HIV and malaria combined; World Cancer Day (WCD) was established in 2008.

In commemorating the 2021 World Cancer Day, the World Health Organisation,WHO, has identified breast cancer as the most common of all cancers in the world.

The Union for International Cancer Control (UICC), established the World Cancer Day (WCD), on 4 February, 2008, to raise awareness and generate support for people living with the disease.

From then on, WCD has been commemorated annually. However, the impact of the celebration seems quite limited, as the prevalence of the terminal disease continues to rise from year to year, and from border to border, claiming multitudes of lives all along.

This year, “I am and I will” is the theme and it acknowledges that everyone has the capacity to act in the face of cancer. 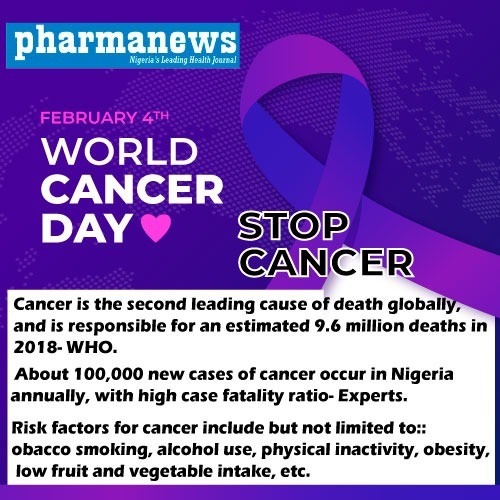 According to WHO, one major issue that has been generally identified as a setback in the fight against cancer, is inadequate medical facilities for the screening and treatment of the condition, as well as late presentation of patients to care centres.

A WHO survey conducted in 2020 indicated that treatment for cancer had been disrupted in more than 40 per cent of countries surveyed during the pandemic.

According to the findings published on their website, it indicates that delays in diagnosis are common, while interruptions to and abandonment of therapy have increased significantly. Meanwhile, enrolment in clinical trials and research output have declined.

The health organization said cancer is the leading cause of death for children and adolescents, with an estimated 400 000 children diagnosed with cancer each year.

The agency added that on International Childhood Cancer Day, 15 February, they will be releasing a “how-to” guide for policy-makers and programme managers on strengthening childhood cancer programmes; a new assessment tool to facilitate harmonized data collection and to enable expedited, real-time interpretation of collected data on cancer among children; and an online community-of-practice information-sharing hub for childhood cancer.

“Breast, cervical and childhood cancers all have a high chance of cure if diagnosed early and treated appropriately,” WHO said.

Andre Ilbawi noted that lung cancer was the most common type for the last two decades, but is now in second place, ahead of colorectal cancer, which is the third most widespread.

He also said obesity in women was a common risk factor in breast cancer, and is also driving overall cancer numbers.

As the global population grows and life expectancy increases, cancer is expected to become more common, rising to about 30 million new cases per year in 2040 from 19.3 million in 2020, Ilbawi said.

The coronavirus pandemic is disrupting cancer treatment in about half the countries it surveyed, Ilbawi said, pointing to delays in diagnosis, healthcare workers being under extreme stress and research being impacted.