In a bid to stem the tide on the recurrent death of mother and child during delivery, the First Lady of Lagos State, Mrs Bolanle Ambode has taken the campaign against infant and maternal mortality to the Ikorodu Town, where she enlightened the pregnant and nursing mothers, on the best care for themselves and their babies.

Mrs Ambode, who attended the programme with a host of healthcare team among whom were: Dr Jide Idris, Lagos State commissioner for health, Dr. Olufemi Onanuga , special adviser on Primary Healthcare; Hon. Segun Olulade, chairman, House Committee on Health;  Tokunbo Fabanwo , associate professor in Obstetrics and Gynecology at the Lagos State University (LASU) and others, said the high rate of death recorded for this group of people is no longer acceptable. 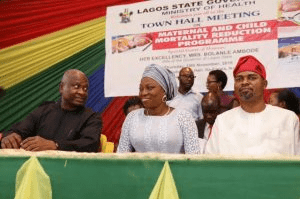 READ
How Rats and Human Behaviour Cause Lassa Fever – Epidemiologist

While drawing the attention of the mothers to the common killers of infants, she noted that most death of mothers and newborns usually occur within the 24 hours of labour and delivery, urging them to always endeavour to register with the nearest Primary Health Care Centre, once they are pregnant in order to avoid these anomalies in pregnancy.