Addressing academic staff and past pharmacy students of Olabisi Onabanjo Univeristy’s (OOU) at the launch of the institution’s Pharmacy Alumni which took place at Westown Hotel, Ikeja, Lagos on 1 May, 2016, Baale who was the keynote speaker reiterated that Pharmacy is the greatest of all professions.

“Even if your aggregate falls in the range of First Class, you will still repeat that course. That is why we tend to have some course mates with whom we started together still in one or two sets below us. It is one interesting feature of pharmacy practice,” he said.

The director of BusinessSchool Netherlands Nigeria who is also a regional partner of Howes Consulting Group further emphasised on the theme of the gathering, “Role of Professional Alumni in Nation Building,” saying it should not be underestimated.

“Although I know you held this launch here (Lagos) because of the dignitaries you invited, I suggest that you host subsequent ones in your faculty back in OOU. If you find the heat too much there, let some of you donate air conditioners to create comfort.

“If the buildings are not conducive, build new ones for the school. That is how it starts. Just as my alma mater alumni, you need to start donating toward the development of your faculty. I know it is an expensive project but you can do it and God will help you,” he enthused. .

While eulogising Prof. Saburi Adesanya, Baale said he had deep respect for the vice chancellor being a veteran pharmacognosist.

He added that while pharmacognosy is indeed a very difficult course, it is not as boring as many people claim.

The pharmacist also applauded the effort of Prof Mbang Femi-Oyewo, dean, OOU Faculty of Pharmacy, adding that without her support, his last years at Pfizer where he worked would have turned out to be a nightmare.

Thanking the keynote speaker for his gesture, Prof. Femi-Oyewo remarked that the launch of OOU Pharmacy Alumni was a dream come true.

“Since inception, we have a total of about 122,000 pharmacists. Anywhere you go, pharmacists from OOU are the best in their chosen fields. However, a school cannot do without alumni, which is why we need to have a formidable one on ground.

“The first and sixth pharmacy sets had come to donate things to the school. I was also amazed to receive a delegation of past students who trooped out to honour me on my birthday. This is the first time any former student is coming to honour a dean in the school. We expect other past students of the faculty to see how they can contribute to the development of the institution,” she urged.

Buttressing her view, Prof. Saburi Adesanya, vice chancellor of Olabisi Onabanjo University said he was elated that something as big as alumni commissioning was happening in the Faculty of Pharmacy.

“Many of you must have been wondering why Prof. Femi-Oyewo and I are so close. She was actually my coursemate at the University of Ife. But I am happy today that since its creation, OOU Faculty of Pharmacy has grown in leaps and bounds.

“For those who have recently visited, you will agree with me that the buildings were not the same as the ones you used during your time. Your new pharmacy facility is one of the best in any Nigerian school today. We are not there yet, but we believe that we can be the best in the world,” he said.

Charging the new members of the alumni, Afolabi Sorunke, national president of OOU Alumni Association, stressed that there were numerous benefits attached to being members.

According to him, joining prestigious clubs like Ikoyi or Ikeja club costs about N2 million per year.

“But let me reassure you that both don’t even have huge lists of members that match those of OOU. We have members in United Kingdom, The Netherlands, United States, and some other African countries. OOU is reaching far greater heights, let us be part of that success story,” he charged.

The mission of the pharmacy alumni, according to Pharm Adetutu Afolabi, chairman of the inaugural committee, is to bring together successful pharmacists, network and also see to the betterment of present pharmacy students of the institution.

The event featured activities such as constitution of inaugural executive members for the alumni, as well as presentation of awards to the trio of Pastor Kayode Yusuf, managing director of L’Pacemaker Pharmaceuticals Limited; Prof. Saburi Adesanya; and Prof. Mbang Femi-Oyewo, in recognition of their support for the inauguration of the alumni. 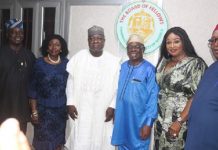 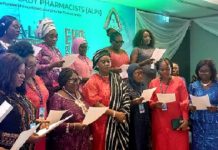