Worried by the sharp decline of professionalism among pharmacists, particularly those in the hospitals and communities, Professor Isa M.Hussaini, dean, faculty of pharmacy, University of Maiduguri, has called for an urgent intervention of the two umbrella bodies of PCN and PSN to rescue the profession from further deterioration.

The dean, who spoke with Pharmanews in an exclusive interview, expressed his displeasure with the way and manner in which some pharmacists operate today, as against the novel practice that existed in the seventies and eighties.

He went further to suggest that some of those facilities should immediately be closed or heavy fines should be imposed on them, if they refuse to improve on their practice. He noted that the storage facilities and environments where they operate are very filthy and hot, which definitely contribute to the deterioration of the active ingredients in the drugs.

The don, who has just been appointed a fellow of the Nigerian Academy of Science (NAS)  also listed major areas in the health care industry that need to be improved upon in 2013 to include: preventive medicine (vaccination and environmental hygiene), diagnostic medicine (radiology and pathology) and pharmacy practice (retail and hospital pharmacy).

His words: “Any society that ignores academic research is doomed to fail and will continue to parasitise on other progressive countries and societies. The main reason why countries such as the United States of America (USA), Japan, Germany and Britain, just to mention a few, are developing very fast is due to huge investments in academic research.”

Urging Nigerians to follow the good examples of other developed countries in the area of academic research, he said the US spends over $50 billion on academic research through the National Institutes of Health and National Science Foundation. He stated that the returns from such investments are new and improved products that advance the lives of US citizens, and they export the technology/products to developing countries that lack capacities to do research but spend money on finished products.

READ
2022 Must Be Year ‘We End the Pandemic’, Says WHO Chief

As regards the activities of the committee set up by NAFDAC to verify the curative properties of some herbs for various terminal diseases, he said it is a welcome development which may save the lives of Nigerians and reduce astronomical cost of cancer therapy, but should be done with caution.

“The committee constituted by NAFDAC should only recommend herbs that have been scientifically validated to be effective in terminal diseases before recommending the use of such herbs. Toxicities of such herbs should also be established with LD50 values before patients are given such preparations. We had tested over 54 herbs that are claimed to have anti-cancer efficacies. We could only confidently confirm the robust activities of eight of such preparations in Glioblastoma multiforme (GBM) and breast cancer cells.”

Assessing the performance of pharmacist students, he described it as excellent, considering the prevailing situations in our universities and country, in general. He said just like before, students are willing to work hard and assimilate new materials and the state-of-the-art techniques. “Most of our recent graduates are doing exceptional well in hospitals and pharmacy schools.”

“My advice to pharmacy students is to endeavour to be honest, hardworking and graduate with the best grades possible. I expect them to do their best and the sky is their limit. They have mentors, role models and heroes in their faculties and in pharmacy practice outside the universities.”

“To my registered pharmacy colleagues and friends, I advice them to be of the highest integrity and protect the image of our novel profession. We formulate, manufacture and dispense the most important substance (drug) known to mankind. I advice my colleagues to store this drug in a clean environment at the right temperature, respect our client, the patient, with outmost respect and perform pharmaceutical care with the best professional integrity. Our knowledge of drug information and physical appearance should portray the importance and value of our noble profession.” 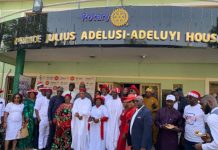