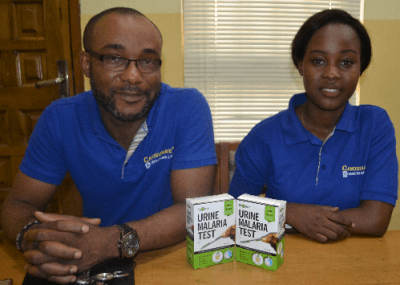 In what has been described as a landmark achievement in the Nigerian pharmaceutical industry, the partnership between Geneith Pharmaceuticals, a leading pharmaceutical company in Nigeria and Fyodor Biotechnologies, has birthed the launch of the first ever non-blood malaria test kit in Nigeria.

Explaining the development in an interview with Pharmanews, during his visit to the company in Lagos, Geneith’s Deputy General Manager, Mr Emeka Nwachukwu said that the special test kit that detects malaria from a tiny quantity of urine had begun to gain wide acceptance in the Nigerian market.

Nwachukwu, who announced that the test kit had earlier been launched in Abuja on 11 November 2015, said that it took seven years of painstaking research by a Nigerian-born scientist in America, Dr Eddy Agbo, to come up with the innovation.

The Geneith boss was however quick to add that the test kit was not meant to encourage self-medication but to help individuals detect and diagnose malaria early, and thus reduce blind treatment, in which people take anti-malarial drugs for any kind of fever.

In his words, “The greatest advantage of this product, and the reason Geneith Pharmaceuticals Limited has taken the gauntlet of ensuring its availability in every Nigerian home is that the Urine Malaria Test kit (UMT), does not require blood. It is one step and not complicated to do. Results are obtained quickly and accurately. It is affordable and much less expensive than the current test that is done in the pharmacies or hospitals. So, doctors are able to deliver the UMT to patients cheaper than the current method of blood test.”

On how to ensure only the genuine product gets to patients, Nwachukwu  said, “each of the test pack has a product code, so one can Scratch off the code and text the code to the number 1393, and you get a message back whether it is valid or not.”

Dr Agbo, who invented the Urine Malaria Test kit, is the chief executive officer of Fyodor Biotechnologies, and a Research Fellow at Johns Hopkins University School of Medicine, United States. He worked on diagnostic and therapeutic biomarker discovery and has over 15 years of biomedical research and direct product development experience in university and industry settings.

Agbo founded Fyodor Biotechnologies in 2008, and his company won a minority-owned business achievement award from the Greater Baltimore Committee. He is working on other patents such as a genotyping and diagnostic biomarker patents as well as another urine test kit that will detect both malaria and typhoid, in a single test.