– As 12 Pharmacists Get FIP Global Awards 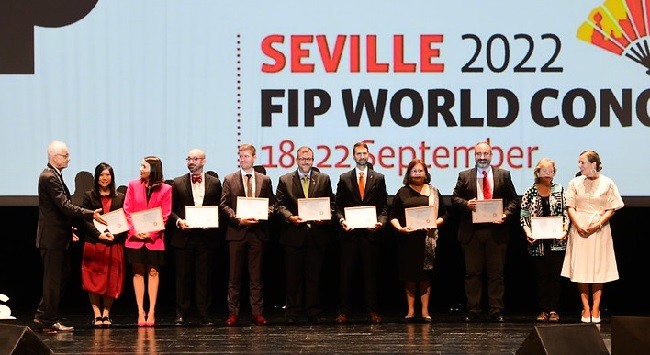 Dr. Roberto Frontini, a hospital pharmacist has been conferred with the highest honour of the International Pharmaceutical Federation (FIP) for pharmacy practitioners- the André Bédat Award.

The award presentation took place at the ongoing 80th World Congress of Pharmacy and Pharmaceutical Sciences holding in Serville, Spain.  The Congress also saw conferment of global awards on eleven other pharmacists.

The André Bédat Award is one of FIP‘s highest honours and is awarded every two years.

On receiving the award, Dr Frontini said: “I am honoured to receive this André Bédat Award from FIP but the honour is not only for me but even more for the teams who supported me in my pharmacist’s life. Especially, I have to thank the EAHP board and staff, who had a crucial role in creating the 2014 European Statements on Hospital Pharmacy.”

Dr Frontini, a German, began his career in Pharmacy in 1988. He currently represents healthcare professionals on the European Medicines Agency Pharmacovigilance Risk Assessment Committee but he also holds posts as director or head of pharmacy at a number of German hospitals and lectures in Pharmacoepidemiology at the University of Leipzig.

In a statement made available to Pharmanewsonline, he is credited with laying the groundwork for a number of policies and professional frameworks that are coming to fruition today in the advancement of hospital pharmaceutical care. These include: establishing an  European common training framework to harmonise hospital practice education and training in view of freedom of movement of pharmacists within the European Union; bringing together patient groups, medicine, nursing and pharmacy in order to create the European Statement of Hospital Pharmacy; and creation of a European Cooperation in Science and Technology Action to solve medicines shortages.

He served the European Association of Hospital Pharmacies (EAHP) as its president from 2009 to 2015.

Frontini also delivered the André Bédat Lecture, entitled “No borderline — Barriers in pharmaceutical care”, on Monday, 19 September, 2022, at the Congress in Seville, Spain.

FIP Distinguished Pharmaceutical Science Award (mid-career) recognises an outstanding research-active scientist, who has made significant contributions to the diverse field of pharmaceutical sciences and is given every three years.

Pharmanewsonline reports that the FIP Pharmaceutical Education Recognition Award (early career) is an award that recognises an outstanding early career individual, who has made important contributions to their field of pharmaceutical education at a national level, and who is emerging internationally. The award is given every three years.